Per usual, I tried getting all the guests to sign my doodle poster. The results have turned out to be hilarious.

I'm actually quite proud of it. I love how it's filling up and that the stars are totally cool with the idea of poking fun of a co-star.


And for those that I had already had sign my poster at previous conventions [and those that "ARE NOT ALLOWED TO DO PERSONALIZATIONS"] I created my own poster that had all of the guests pictures from the con on it. Except for Richard. But he got over that pretty quickly.

My god that got to be another long ass post on nothing more than autographs. Sorry you guys! I guess I get rambly over stupid non important stuff. This is why I don't do reports. Sorry if I bored ya! ♥

Summary: It's a video centered mostly round the boys on set with a little outside interaction thrown in for good measure.
Song: 'Let Go' - Frou Frou
Featuring: The cast and crew of Supernatural.
Size: 43MB
Footage: So, SO many amazing people have graciously contributed videos over the years, all of whom I thank along with the cast and crew of Supernatural for making this amazing show.

This time 'round it's nothing but Jared and Jensen, brought to you by the ever generous

Feel free to snag if ya see any you like! As always, letting me know what you like/dislike is always appreciated! ♥

Since I spaced out yesterday and didn't get around to posting part two, here is all the pictures I have left to post of the boys! Enjoy!

And that's it for these two! Coming up in the possibly near future: Gabe, Samantha, Malik, Chad and Richard. Also, more than likely, quite a few icons.

Breaking these one's up as there's over a hundred and thirty:

Dude. My eyeballs hurt. O_o And I'm not even entirely sure that I got all of them in there. So, yeah. Just follow the links to my photobucket account to view what I've got up already - just in case I did miss a couple of codes. Be back later tonight with part two! For now I'm off to watch The Sisterhood Of The Traveling Pants with my sis :)

Okay, so I dwindled the crap ton of photos down to a handful of decent ones I thought you guys might be interested in seeing. I'm going to post all of these in different posts throughout the next few days, as I know you guys wanna see em as soon as possible ♥ I'm also going in reverse order so today'll be the boys [which I'm sure ya'll are more interested in than anybody else] followed by the rest of the weekend.

In this post'll be 36 photos of Jared and Jensen from the breakfast. You'll notice most all of my pictures are profiles as the boys never seem to want to turn around. My seats were still pretty awesome and I'm happy the result! Enjoy! 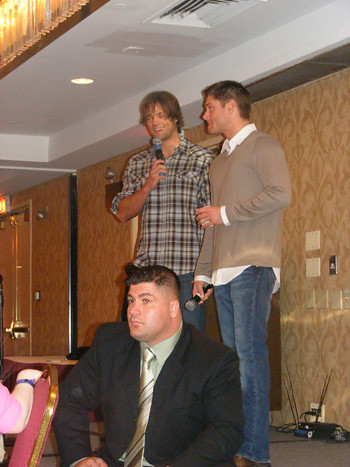 
Sorry about the red-eye and weird-ish angles - my camera's zoom was sticking and I couldn't pull in or out on occasion. Hope you still enjoyed them!

To come later: Jared's Panel, Jensen's Panel and maybe possibly picture evidence of one the best 21st birthday weekends ever, courtesy of some extremely awesome chicks ^_^

Okie doke, I wanna start this off my saying that my skills with a camera are not so awesome. And that I tried really hard to get the entire question/answer on film when I saw who was speaking, but I'm kinda really slow at working the previously stated camera. But! I did manage to get the answers so I hope that redeems me!

earlofcardigans [and I know you already have a way cooler version but I hope you'll still enjoy this one]: Jim Beaver saying hello to his sugarbooger

wenchpixie [I'm so sorry I missed you asking your question!]: Steve Carlson talking about his mad [or not so mad as the case may be] skills of bra unlatching

And I'm posting this again of Jared talking about being the YED's "favorite" in a whole nother light 'cause the coding was funky in the last post:

FINALLY got this sucker to upload somewhere. Enjoy!

Oh, some set up, that might help - I think the question was something along the lines of what Jared's favorite scenes to shoot were and I guess Fred was in the front row somewhere and piped up with "Any scene where he's without a shirt!" Something awesome along those lines anyhow, and this was Jared's fantabulous reaction! 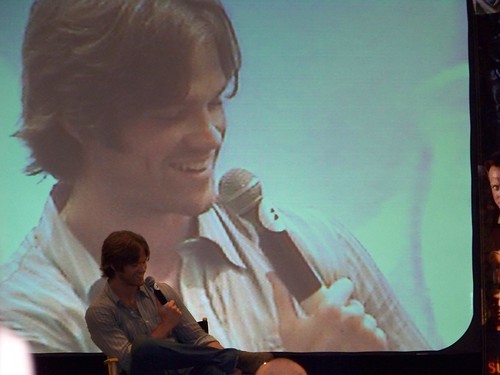