An mouse was found dead earlier today in the middle of the floor of a Cambridge sitting room. The body showed signs of an attack. Resident cat Miss Telzey denied all knowledge of how this had come to pass. "Kill my own food?" she told our reporter. "I would never do that! I am a Princess, and I expect my food to be properly prepared and presented to me on suitable plates by my human servants. Perhaps it had a heart attack or something. And anyway," she continued, "I was upstairs asleep the entire time."

Her fellow feline residents Horus and Random were unavailable for comment, but sources close to this journal report that at both of them were recently involved in an assault on a juvenile wild rabbit. The household is continuing to investigate.

Skirt of the day: blue tiered.

So it's been a while since I posted here. I'm not sure why. I did Nanowrimo in November and hit the 50k, and am now trying to wrangle the book into shape. Then there was Christmas, which was quiet and pleasant. And January. Which was as it was. No drama, no crisis, just life. And my life is fairly ordinary.

We are now once again a three-cat household: Miss Telzey's little brother Random came to join us in early December and has settled down very well. He's a lovely, friendly, confident little boy and he's getting on well with both Telzey and Horus. Both of them let him snuggle up to sleep, and play long games with him. Here he is: 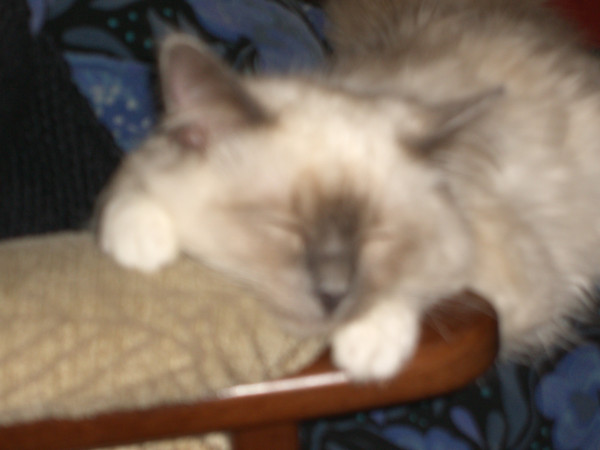 And that's me. How's everyone else?
Skirt of the day: denim.

Our darling Ish cat passed away last Thursday, from suspected pancreatic cancer, while we were at Worldcon.

groliffe was splendid in caring for him at the end, and the Cambridge Vet School was the best place he could have been in the circumstances. He knew and liked it there, and they loved him.
We are heartbroken. I never would have gone to Sasquan if I'd thought he was this ill. Horus, who adored him, is hunting and calling, and wanting lots of cuddles from us and from Miss Telzey. We are doing our best to reassure him. Ish was a lovely, sociable, determined boy who had many adventures in his 12 and 1/2 years, made many friends (including half a mile away at the local gas showroom) and had Views on everything. He was the cat who chose us, and we will miss him forever.
( Collapse )

I'm over at Strange Horizons today, as part of a roundtable on representing marginalised voices in historical fiction and sff, alongside two writers I admire a lot, David Anthony Durham and Joyce Chng (aka J Damask). I loved getting to do this: Joyce and David are very insightful people and I learnt a lot; and our moderator Vanessa Rose Phin asked excellent questions. You can find it here:
http://www.strangehorizons.com/2015/20150427/2chngdurhamsperring-a.shtml

In other news, the cats are planting themselves in the flowerbeds where the sun is warmest, the wip is progressing slowly and the lilac bush just outside my window is coming into bloom. I like April.

Skirt of the day: denim

Three words you can't go a day without.

An easy one! Answers behind the ( Collapse )

She's now 15 weeks old and getting quite big. The boycats are getting used to her: she's succeeded in sleeping curled up with them on the bed and in getting Ish to let her share my lap. These photos were taken by the splendid Man In Black, who is a much better photographer than me.
My eye is healing: vision is still not great, but now this is down to having the wrong lenses in the glasses, not to anything in the eye. Greetings, internet subjects.
I have now inspected all of my new domain and find it to be mainly acceptable. There are lots of interesting places to investigate, soft things to sit on, vertical surfaces to sharpen my claws on and some amusing things to bat and sniff. There are, however, still two doors which the minions will not open for me, which is not at all good. One is called 'the box room', which means it must be for me, because boxes are the hereditary right of all cats. The other is called 'the airing cupboard'. It smells nice and warm. Clearly, I should be allowed to sleep in it.
The new cat subjects are beginning to learn their place. The big spotty one -- the minions call him 'Horus' -- has stopped running away and now accepts my greetings politely. He lets me bat his tail sometimes, too, though he still has not learnt to wash my face when I tell him. The beige one -- he's called 'Ish', which is a silly name -- continues to use improper language in my presence, but I have shown him that I am not impressed and I still go up to him and expect play. Last night he was asleep on the big comfy minion bed and I sneaked up and went to sleep next to him. Hah! That will show him. I like the minion bed. It is very warm and there is room for three cats at once, although the minions seem to be a bit squashed. I don't know why they insist on sleeping on it: I would let them sleep on my bed, because I am a kind and generous princess. Male minion is very good at playing, especially with string and feathers on the end of a stick. It's very amusing watching him wave them around. I pat them and chase after them to make him happy. And I chewed his fingers, too, because I want him to know that I am down with my people and not at all stuck up. The female minion isn't as good at playing -- she waves the feather all wrong -- but she has a nice lap that I like to sit on. The boycats like to sit on her, too, but I am there first. Hah! I am princess! Today I went for a ride in my carriage, to see some more human minions at a place called the vet. It looked very interesting and I told female minion to let me out of the carrier to explore, but she refused to obey me. I will punish her later. There was a lot of fuss at the vet and everyone said how beautiful I am and how wonderful. This is only Right and Proper and I shall expect more of the same if we go there again.


This is Kari: little blue girl is doing extremely well, and spent last night cuddled up on the bed with us and the boys without any hissing or problems (though she did wake up for play at 6 a.m.). We seem to have decided on Telzey as her everyday name, as she's brave, confident, very smart and dauntless. Her new favourite toys are a furry spider and a toy mouse, both of which are on long pieces of elastic and hung from the sitting room door. She spent nearly an hour this morning catching and killing both of them repeatedly. Right now, she's having a nap downstairs in her igloo. having chased around all morning (and eaten well).

Skirt of the day: blue wedgewood.

New photo under the ( Collapse )

I have now taken possession of my new domain. It is acceptable, although it clearly contains areas to which I am not being given access, which is of course Wrong, as I am a Princess and should be allowed my own way at all times. The selection of toys is pleasing, although the time devoted to waving them for me needs improving. Several areas have been offered to me as places to sleep and I am taking time to decide which of them is most pleasing to me. The food is regular, if unimaginative. When I first entered this domain, fresh chicken was provided, which was good, but subsequent meals have proved to be more ordinary. I feel this needs work.
This domain appears to contain two other cats. They are not at all up to my standards. When meeting my new subjects I expect to be greeted with ear-washing and an offer of a game. Neither of my two new subjects seems to understand this. One of them -- the beige one -- has clearly not been well-brought up at all. When I indicated to him that I was ready to receive his homage by batting his tail and then putting my head under his chin for the ceremonial lick, he used language that I can only describe as unacceptable. Of course, I did not reply in king, because I am a Princess. The other one -- large, grey and spotty -- seems very stupid. When I offered him my head to wash, he ran away and when I issued an invitation to a game, he hid behind a cushion. It is natural that he should be awed by my majesty, but I do expect my new subjects to overcome their trivial fears and accept my attentions gracefully.
The new minions are... acceptable. The male one insists on doing something called work which means he is not available to wait on me on demand. The female one is somewhat better, but further training is indicated, as she seems to believe that it is allowed to leave me without company for minutes at a stretch. I intend to devote part of my time today to teaching her how to serve me correctly as the amount of fuss, play and general obedience is not yet as I would wish.
Once proper behaviour has been installed in my minions and subject boy cats, this place should, in my opinion, prove satisfactory.


This is Kari: little blue girl is settling in well and is full of beans. Nothing about being in a new environment seems to faze her at all: the major complaint is that she doesn't have full access as yet to the whole house. (This was her view in the car, too. Movement and noise: fine. Being shut in a carrier: unacceptable.) Ish is not impressed with her at all (though he's very interested in her food): he managed to get into her room while I was feeding her, and she invited him to play without any fear at all. He rather disgraced himself by hissing, and is giving very dirty looks at the dining room door. Horus is deeply suspicious. The dining room shouts at him! There is a new very small cat and she wants him to wash her! Run away! Panic! I'm hoping he will get used to her soon and be willing to play -- he's showed no aggression beyond some fur-prickling, which is standard with him when he's nervous. Ish is probably going to take rather longer, but he is preferring to issue 'Keep your distance!' warnings to her, rather than anything more active.
She is very confident and friendly, and has a huge purr. She doesn't see why she can't have my attention all the time and yells every time I dare to do something else. I'm contemplating calling her Violet, after Violet Elizabeth Bott of the Just William books, as she is the most imperious little cat I have ever met.
And she is, naturally, utterly adorable.

And this is the Mighty Ish ( Collapse )

catherineldf asked me for pictures of Horus-paws. So here he is (under ( Collapse )
Collapse