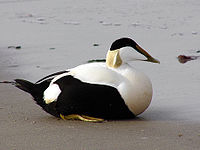 Look at this duck. Look at how smooth and fluffy it is. Don't you just want to take it home and snorgle your face in it?

If so, you're not the first. Ladies and gentlefolk, I bring you...the origin of the down pillow!

Imagine this: It is winter. You're a primitive fisherperson, living in a little mud hut. You're lying on your straw mat shivering while these cozy little buggers are mucking about by the thousands on a nearby clifftop. One of them strays from the flock and waddles down the beach, combing the rocks for mussels. You reach for your spear. It turns its poofy little head. Too late!

Capcom has announced that they're making Street Fighter 4!!

I've always been more of an SNK person, but when Capcom announces their first Street Fighter game in eight years, even King of Fighters fans raise eyebrows.

In celebration of the announcement of Street Fighter IV, I am posting ridiculous fighting game tournament videos. 99.9(+0.1?)% of you are not going to understand these, but I don't care. You have your sports and I have mine.

Though actually some of these are so insane that if you have ever done as much as touched a Street Fighter or KOF cabinet before, you'd get how ludicrous they were.

If you post a Smash Bros./Melee video in the comments I will delete it. I don't care how deep and technical the glitches are or how much money you won in your last tournament. Go put those skills to use in a real fighting game.
Collapse