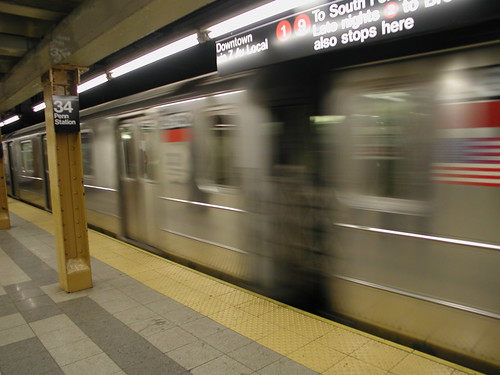 The New York subway is a creature of myth; a howling, screeching, clattering creature of biblical girth. It announces its arrival by a deep, earth-shaking rumble, followed by a blinding flash of light, followed by an impossibly long blur of roaring steel and the shriek of hydraulic brakes. After three months in the city it still never ceases to amaze me how indifferent New Yorkers are about riding to work on such a terrible beast. They stand with their toes across the yellow warning line, idly thumbing through copies of Metro and the New York Times as the great metal snake hurtles past them at speeds that defy metaphor, blowing the pages of their newspapers into faces with a great rush of wind. As the creature quite literally grinds to a halt they stroll through hissing portals into its belly, as if simply walking into another room, and check their watches irritatedly as it thunders down miles of mildew-tiled canyon, roaring and wailing and jerking about as it twists its way down the track. A far cry from the polite sterility of Taipei MRT or the gentle purr of the San Francisco hybrid bus, the New York subway does little to hide the absurd impossibility of its existence. This is no Tube, no trolley, no three-letter acronym for calm and domesticated mass transport. There are no modern shock absorbers, or mufflers, or soothing tones to indicate the beginning or end of a stop. This is just the subway, as to our ancestors the forest was just the forest, and the ocean was just the ocean. It is what it is: a city-long, straight-track, 800-mile tunnel in the earth through which rollercoasters the length of a city block hurtle through on a regular basis. An engineering marvel that its original engineers, Edison-era aficionados of the whiz and the bang, never bothered to sanitize for the public. It's like something Sony ImageWorks would whip up for their next epic fantasy film, something so old and terrifying that to its users it is the very definition of normal. And, watching the bored-looking occupants of these packed little cars being tossed around like ball bearings as the beast screams and thrashes its way through the underground, completely oblivious to the absurdity of what they are doing--for an outsider like me, it is impossible not to grin.

The tunnels themselves--they are only a hundred years old but they look ancient. The tile mosaics that decorate and display the name of each station look like they belong in a museum (and I suppose the 34th Street station, which boasts the location of Museum of Natural History on an enormous ceramic sign, technically does). Were it not for the constant, almost obsessive-compulsive rigor by which the MTA cleans them, you'd expect them to be completely overrun by graffiti and mold. Rats skitter about dripping rain-pools beneath the tracks, and in the distance you can sometimes see little brightly lit service islands, the floor-to-ceiling graffiti illuminated by floodlights from specially designed service cars. From the train I can sometimes catch a glimpse of squads of orange-vested men tinkering away at these things, revealing vast crevasses and rows of mysterious doors.

I remember reading somewhere that if all humans were to mysteriously vanish from the earth--just up and go--the New York subway would be completely inundated once the power plants failed, because all that keeps it from flooding is a series of continually churning electric pumps. We got a taste of that a couple weeks ago, when the pumps were overwhelmed. And thus this subway, this artifact of normalcy on which our daily lives is dependent, is inextricably tied to our current civilization. All it takes is one war, or one mass evacuation, and the subway becomes little more than a dream of the collective historical imagination--a fact easy to accept but impossible to believe--like dinosaurs and Teotihuacán. Someday the existence of parts of the blue and orange lines may only be proved through sonar. I can imagine future archaeologists diving deep beneath the waters to explore these artificial caverns, flabbergasted by things like turnstiles and Metrocard readers and tile-mosaic station signs. To a civilization with no knowledge of our own these things will be incomprehensible. Perhaps they will read our graffiti and surmise that the subway had some kind of religious significance, or find paper residue and the instruments of buskers and guess it was some kind of communal gathering place. I doubt anything they could speculate about the supposed use of these tunnels could be more splendid than the truth.

Mr. Hu Jintao? If, as you claim, you are truly committed to "democracy, the rule of law, equity, justice, sincerity, amity and vitality" among your citizens--your own words--then you know what you must do.

LJ is blocked in China, but freedom finds a way. I hope your people find that way too, Mr. Hu. My people certainly have.