This is Danish Lagkage. This is the tradtional (and normal) birthday cake in Denmark. There is fruit inside (usually tangerines, strawberrys), some sort of jam jelly type stuff, and the cake itself is similar to poundcake. Its good stuff. Danes think I'm nuts because I like to take pics of food but the differences in food still fascinate me. 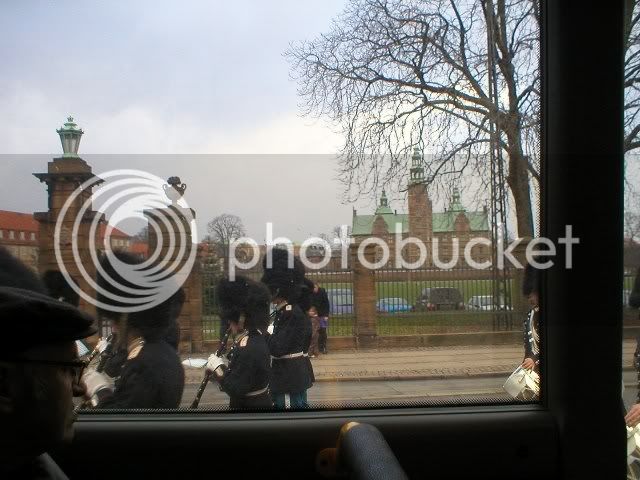 So I'm walking down the street in Nørrebro today, which is a part of Copenhagen that is to say the least, "multicultural", and this big grinning Somalian negro whips out this pic, and hands it to me. I smiled back and with all my Kentucky charm said "dejlig billede!" (which more or less means nice or good picture) then we both continued on our way. I'm still trying to decipher this one. I wanted to hang it on the fridge but the wife wouldn't let me.

Pan by Knut Hamsun -To give a brief synopsis a Norwegian man goes to a rural area of Norway to spend several months hunting and living in a cabin in the forest. Most of this book deals with his interactions with the locals of this rural community, in particular two women. One is married but makes herself available in all ways to the main character, the other who fancies herself an aristocrat of some sort seems to be mainly interested in mind games and seeing how many hoops she can make him jump through to please her. Because he is socially backward he often acts in inappropriate ways in social settings and towards her, which both enrages and makes her all the more intrigued by the outsider.

I liked this book, as I do everything else by Hamsun I have ever read, but he always writes good or very good novels but seems to fall short of writing a truly great book. Hamsun was a good writer but I think he is overrated in some quarters. One thing I do like about him is his stories are VERY Scandinavian, not just in predictable ways, but also in very subtle ways that unless you've lived in Norway/Sweden/Denmark that you probably wouldn't pick up on. Overall I liked his Growth of the Soil and Hunger much more than Pan. My favorite piece of Scandinavian literature however would be by another author Beyond Sing the Woods by Trygve Gulbranssen.

The Missionary Position by Christopher Hitchens -I really didn't need to read this book to figure out that Mother Teresa was just another globalist tool and a propaganda/fundraising cash cow for the Catholic church but Missionary Position does a good job of driving that point home and giving good solid evidence to that fact. To give a few examples, the millions she took from the mega swindler Keating and never returned, her response to the Dupont chemical spill in India instead of seeking justice and calling to make Dupont acountable was telling people to "just forgive" so as not to cause any problems with the globalist corporats. Then of course there were the notoriously deplorable conditions in her hospitals and shelters, totally filthy, where they not only reused needles but their idea of sterilizing them was washing them with cold water! Also people were not given proper pain medication (Mother Teresa had this idea that the more you suffered the closer you were to Christ!) So you had things like this going on but at the same time it was found out in just the bank account for her shelters in the New York area there was $50 million dollars sitting idly. When the city of San Francisco donated a fully furnished shelter to her for a shelter for homeless men who had AIDS she promptly had all the couchs, beds and televisions thrown out insuring that the dying would live as comfortless as possible. All I can say is thankfully this cash cow for the forces of evil in this world is dead!

Egils Saga by Anonymous -Egil was a classic anti-hero, a warrior, poet, runemaster, traveller, adventurer, took crap off of nobody, had bloodfueds and vendettas that went as high up the ladder as the King of Norway. The guy was everything an Odinist should be. I am a lover of Icelandic Sagas and have read many, if not most of them but this one is one of my favorites.

Seeds of Deception by Jeffrey M. Smith -After reading this book I have to consider Monsanto not just to be a typical greedy make money at all costs multi-national corporation but given their prior history, even before what they are doing with genetically modified foods an out and out threat to humanity. Plus what the global elites are doing with the Svalbard seedbank that was funded by Rockefeller and Bill Gates money I almost have to wonder if they are planning on out and out poisoning us all through the toxic corporate controlled food supply. I am grateful that I live in Europe where there has been opposition to genetically modified foods and for the most part they have been kept off of the shelf but I fear its only a matter of time before they find a way to worm their way in. Thank you Jeffrey Smith for being a real journalist/investigative writer and exposing Monsanto and their ilk!

I just pushed a wrong button and lost a long post. I am fucking PISSED off right now to the point where I came close to deleting my livejournal account out. In the meantime here's another statue.

A statue that commends the Greenlanders for their greatness or something along those lines. There is also a similar Greenlander tribute statue just a few feet to the side of this one. The great irony and humor of this is in the little square where these statues are, every day there is a large group of wretched looking Greenlander welfare drunks sitting around guzzling alcohol and carrying on. More often than not they are actually sitting directly on the benches below these statues. 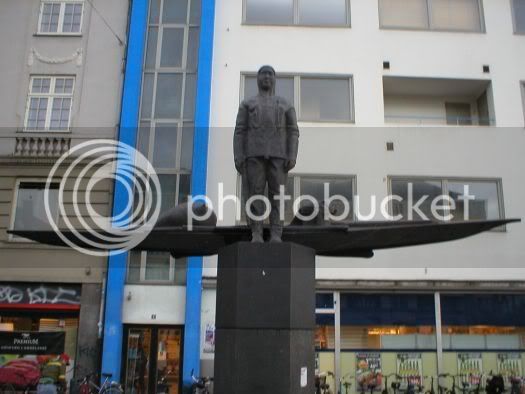 There are many interesting statues in Copenhagen.

A rare instance of some intelligent grafitti around here. The text around the Lord Rothschild/J.D Rockefeller character thats snacking on planet Earth loosely translates to something to the effect of Wall Street is eating up/destroying the Earth. Of course I doubt that the artist understands that the same people created, funded, promoted and profited from his beloved Communism.