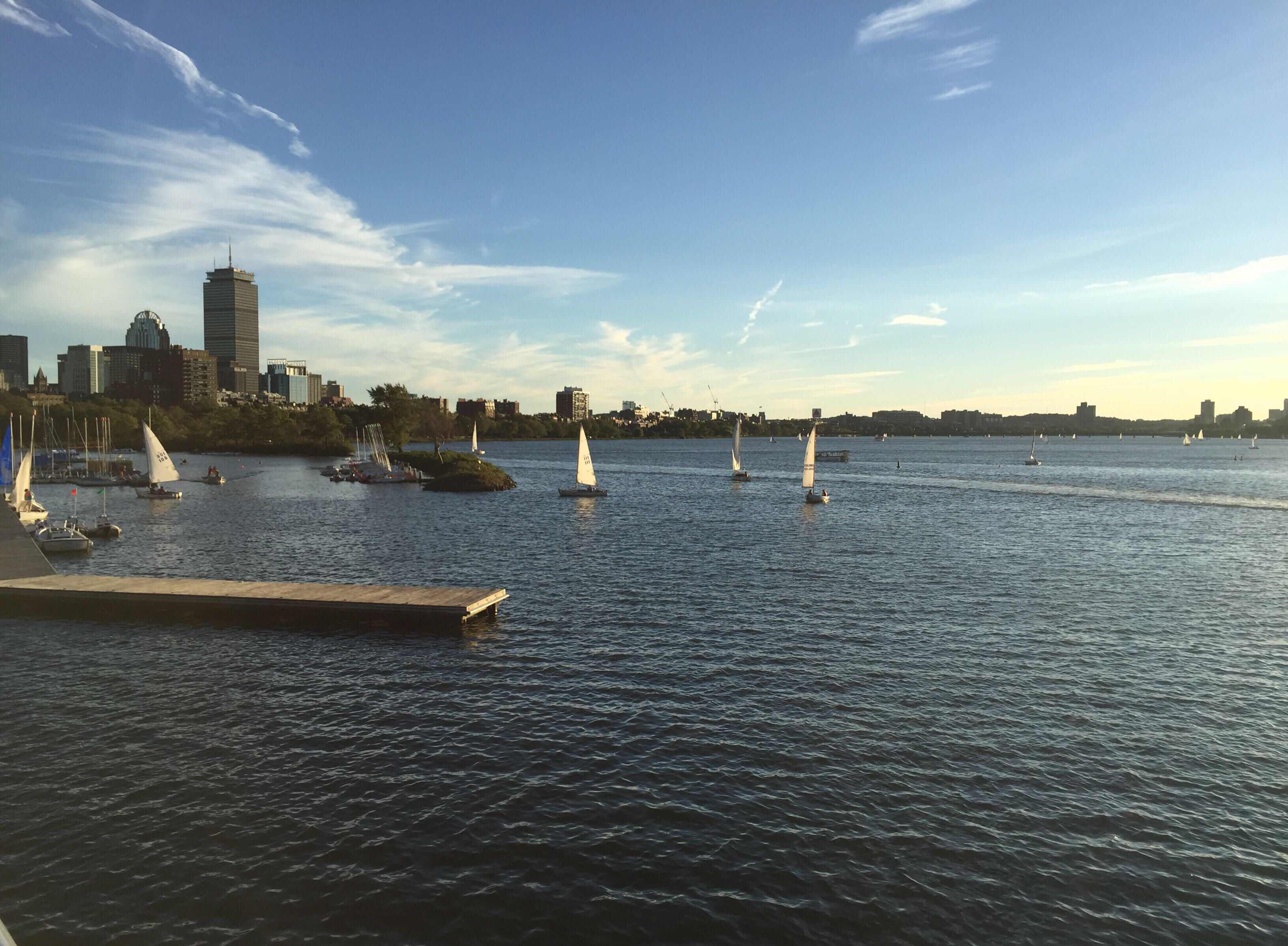 If any of you would like to go sailing, lmk.

To the CBI cognoscenti: Mercury red, Laser and 420 green

a big problem, of course.

I worked, umm, kind of late, and took a 12:30a Red Line train home.  All was normal until it started moving up the Longfellow Bridge out of Charles/MGH, at which point it stopped moving, at least quickly.

There was plenty of blue flashing coming off the third rail pickup shoes, which suggests that there was enough ice on the third rail to keep them from actually picking up much power.  The car bucked and stalled as it got dribs and drabs here and there, and I think the operator was cutting the throttle in and out to try and get through too.  The train got slower and slower, down to about 1-2mph, and I seriously started to wonder how long we might be sitting up there in a cold, powerless train that wasn't going anywhere.  But this also happened to be just as the train reached the top of the bridge, and eventually our friend Gravity reached out with a hand and pulled the train down into Cambridge.  The operator just coasted all the way down into the tunnel.  This all took 5 minutes plus to get across 1000 feet of bridge.

Looking over at the other track on the bridge, I didn't see any snow/ice guards over the third rail.  WTF?  The MTA and Long Island Railroad have these everywhere.  Granted, these might be less practical in a city that gets somewhat more snow, but this is a city right by the shore that constantly gets freezing drizzle off the water.  Count me unimpressed.

So, Doherty's, the big funeral home at Powderhouse Square, is a busy place.  All sorts of people get their last respects paid there; I've been held up by many a police officer's funeral there.  It seemed like a Somerville landmark and institution.

Today, there was a wake for somebody I knew there.  I went.  And I get to see this Somerville landmark in a new light.  I wish it weren't so, but it is, and that's part of the wheel of life.

When Sandstorm was acquired by NIKSUN, I was picked up as a contractor, as I was before the merger.

chocorua wants to hire me as an employee, but hasn't been able to yet.  The budget for contracting has run out, at least temporarily.  So...I'm not exactly separated from Niksun yet, but I'm definitely not working at the moment.

So, I think it's time to start looking for work in parallel to

I've got skills with UNIX/Linux in general and FreeBSD in particular.  Kernel, networking, and OS software development are my main interests but I also have skills in release engineering, hardware support and development, and so on.  I'd prefer a salaried position but I'll jump for the right consulting arrangement too.

I have mixed feelings about NIKSUN.  The company has bright people doing things that are interesting to me, and there are interesting challenges in getting Sandstorm's work integrated, but it clearly also has some management and communication issues.  The merger was a pretty stressful event-- granted, it's the first time either company was involved in one.  I'd still like to continue working there, but it may not work out.

So, I didn't do much this weekend, but it turned out nicely.

Saturday, I went for a bicycle ride, a couple hours long. Nothing special there, except I felt peppier and more energetic than I have all year. Nice weather, too.

goddessfarmer 's animals, and guests, though she wasn't actually there.

I just felt better and more alive this weekend then I have in a while. I actually felt kind of coordinated for the first time in a while.

I think I blame

goddessfarmer 's eggs for this pleasant state of affairs, at least partly.

In the same day:

2) last day of skiing at Wachusett.

I conclude that it isn't winter anymore and it isn't summer yet, so it must be spring.

palmwiz, I'm bicycling out to That Icecream Party. This is rather late planning, made more exciting by my gut being rather cranky this morning. But it and my head seem to have settled down, and I have everything together, so it looks like a go.

See some of you there!

* Others may not think so.

I grump and grargh about the weather, which is not ideal for cycling, or much of anything else outdoorsy. I am somehow convinced by one IRC friend in the PNW that rain is not all bad, and going out for a hike is OK. Due to the afternoonishness of it all and the snotty weather, I decide going off to Wachusett is probably not a good idea. Instead, I go traipse around in the Fells for 3 hours, mostly on Skyline and the Cross-Fells trails. What a nice little surprise. Things I found out:

* The trails are pretty dry, in spite of the showers. There's only any serious mud at the stream crossings.
* Proper hiking socks, all four of them, would have been good. One of my feet still hurts because the tongue didn't lace up too well with just a thin sock on.
* The Fells looks almost...unspoiled early in the season before the trails have seen much traffic. Skyline looks used, but the Cross-Fells trail was very quiet and pretty.
* Things are all green, and red, and popping out, and stuff. Quite a change from Mt. Washington last weekend.
* The Fells would feel a lot more pleasant and remote if there weren't this noisy major highway running through it.
* The softshell I got is a nice jacket, but it doesn't keep me dry.
* I think I like hiking with more up and down than the Fells. Actual mountains, say.
* Hiking is tiring, even if it's not aerobically vigorous. My HRM says I went easier than I ever do on a bicycle, but my muscles feel it.
* Everything's interconnected in there, and it's small. I saw 2 different hiking parties 3 times each, I think.

I overstuff myself with a pancake brunch, which puts me in a coma for a couple of hours. I finally go "meh, it's stopped raining, I'll go out for a lazy ride", about 5pm. It did start off lazy, thanks to the pancakes and the hike, but about an hour in, I found some legs. On the way back home, the clouds actually part and the sun peers through, making the brightest part of the day be 6:30pm. I picked a nice couple of hours to be outside.

You know you get the winter blues. You know a winter beach trip would probably be a very good thing. Yet you are too blah to make the necessary plans. What to do?

feoh's trip to St Martin a few years back has been dancing in my head as a Wonderful Idea.)

So there I am, sleeping in bed on a lazy saturday morning, perchance to dream...

...and the dream involves Work. I'm working at a random company in a development group, along with R, someone I know, who is quite smart, but also unassuming and unassertive enough about it that it's not immediately obvious. We're all working on this difficult project/problem. We're in a meeting; R's reporting on her progress on her difficult corner of the problem (literally-- there's something geometric about it and she's got a corner that looks like, oh, Kendall Square), which is to say, not much. The italian stallion in the group (not modeled on anyone I know) comes back with some incredibly cutting childish remark that includes "if you can't stand the heat, get out of the kitchen". We all look around at each other for a second, rather surprised. R, of course completely offended, walks out of the meeting. The other woman there, also offended, also walks out. I mull this for a second, decide (in dream-land unconsciousness, of course) that supporting R and sending a message is more important than continuing the meeting, or what the boss (a random middle manager, plays no big part in this dream scene) thinks, walk out too. (I find myself in the hallway outside our company in my long underwear walking towards other people and deciding "I should go put some clothes on", so much for continuity.)

semi-rhetorically speaking, what would you do?

(I'm going to get breakfast.)
Collapse