Some of you may have noticed I’ve finally put up banner images on both my site and my LJ. For the record, this is what my site banner looks like. The greyscale is just be temporary until I have time to colour the lines. It’s been ages since I’ve had an LJ though, and already 3 whole years [wow!] since I’ve had my site. Neither have ever had proper banners and it just couldn’t wait any longer.

Anyway, without further ado, I present to you my lines. When I’m done colouring this, I’ll upload a walk through so you can all see how crappy my sketches start out.

Today’s bust of the season features Zoë, a character you may have already seen in the comic. I had fun with the line weights, though I can see a few spots where I should have done better but all in all this isn’t a bad start to the new year. In the last post I talked about how this image is similar to the first picture I drew in 2010. At the same time, it’s still different enough that I don’t feel like I’m regressing. While Coraline certainly has more of a realistic touch, Zoë here has more of an ‘American’-styled lineart feel. Or at least I hope it’s American-ish, because I’m really trying to move away from the anime style I so easily sketch in.

The snowflakes are kind of gaudy looking I know, but I like to think that they make it less appealing to people who want to borrow my lines without crediting. Also, I figure that since I live in Winter Wonderland Canada, it’ll be snow season for at least another 3-5 months. That should give me enough time to draw up a new spring banner. This drawing too didn’t end up at all how I planned. Originally there were no flowers. Originally this was supposed to be a simple, quick and dirty, black haired girl for me to practice inking. It became Zoë when I started getting a little creative with my lines up in the hair. On the bright side, in changing up the character, I’ve decided to add some details to liven up her face in canon. Zoë will now have a piercing – she takes out for work [so no retcon needed hahah] – and handful of beauty marks sprinkled all over. Her chin is expected to be the most square of all my lady SP characters too.

I’m back for another semester at commerce school and not yet behind in anything, so the horizon is bright and inviting. For me, there’s still this hopeful feeling permeating every single day. You can be productive, I’m telling myself, and better yet, I’m believing it.

Hey, that’s a pretty big number. What’s it for?

So, you know how one of my new year resolutions is to take more photos? Well, I was going through my external hard drive to find out how many older photographs I still have laying around and waiting for me to do something with. That is what I’ve found.

I have to wade through 73 folders and 5,704 pictures. I’d totally forgotten about all these. I expect most of them to probably be rubbish anyway, but there might be a few good shots hidden in there. Right now I’m digging through the folders and trying to sort, delete, and save things. And wow, this is actually sort of difficult! I have this strange compulsion to squirrel away even the most sub par of photos. I’m surprised how hard it is for me to just rip through the mess and delete everything that is less than mediocre. I mean, yeah, the worst are gone in a snap, but the rest sort of hang around like awkward teenage wallflowers at the year’s first dance.

Anyway as I work through this mess, (and try to work on the website in my spare time), have a gander at the continuation of my first illustration of the new year. It’s still Coraline, and I was going to make her a giraffe. I got up to the strange little antennae-horns and then promptly forgot what I was doing. I’m not completely happy with how this turned out, but oh well. It was good practice in drawing leaves or something. Why is she hanging out in a rain forest / greenhouse / conservatory ? I don’t know. I wanted to stay away from drawing flowers, but given her personalty , I probably should have. Oh well too late now. If I get bored enough, I may color this yet. Otherwise, she’s staying a ballpoint sketch. Also, at one point, she did have hands and the rest of the upper torso; I just got bored.

Normally I don’t make resolutions because I believe that if you’re going to improve yourself you should start in the moment you decide to do that. This year is an exception for me because I really needed to kick myself into doing more things that I want and should be doing.

This whole webcomic business is supposed to help me with that first bullet.  And while I do also write everything in Sleep Pending, it’s the drawing part that is hardest for me.

Anyway, in my effort to draw moar, I tried to sketch Coraline (not Gaiman’s ) at a lecture I was at tonight. Coraline is another minor character from the Sleep Pending comic. Zoe, her best friend calls her Cici. There is a reason for this, but it’s more of a little buddy thing than really relevant to any plot (mostly).

This sketch isn’t very fabulous or anything, but it isn’t that bad either. I’m tempted to continuing the image (read: overkill) just because I haven’t had a drawing laying around in a long time.

[News]
It rained today and that was lovely.
I also might need to join a support group for hopeless dreamers. I just wish my passions were a little more practical and a little less “artsy fartsy”. Maybe if I had a 12 hour personal cheer leading service I’d feel better. They wouldn’t even have to be cute cheerleaders. If you’re peppy and optimistic I want you on my team. I’m accepting applications.

In other news I’ve had a good/ bad idea. I’m thinking about starting a battery recycling program for my old high school. This might be a dangerous idea, what with all the chemicals etc, but maybe it’s better than the alternative (all those chemicals seeping into the soil in landfills)? And if it goes well I could try to bring it to other schools and then my university. I don’t know if it will catch on, but I figure I should go back into my ‘environmental savior’ mode. I do wish people could be less wasteful and more environmentally conscious though. The terrible thing is, it isn’t due to lack of knowledge but more people being lazy and/or greed-heads. I mean “I recycle my newspapers” will only get you so far. My mistake. Will only get everyone else so far, the ‘Mr./Mrs. You’ here simply doesn’t care. So instead of sounding preachy or whining about the state of humanity, maybe I can discreetly do good and initiate some positive change? I really need to think of more projects like this.
Alas I’m but a poor university student and I can only do so much with my (severely) limited budget. I would feel less disheartened if only I could think of a superhero that maintains a positive outlook while being less than financially blessed. (Moral absolutist Rorschach doesn’t count because he eats cold beans and is insane. Mostly because he’s insane.) It’d also be cool if the superhero wasn’t a hooker, and even better if they were between 20 – 45 years old. I figure I’ll do environmental aid until I get the means to do more humanitarian work.

Here is the line art for the Dripping Alice picture I’ve been working on. From DA:

I’m working on this little lady right now. She’s one of the chicks I’ve mentioned around here, who’ll be in my webcomic Sleep Pending.
[I figured I should maybe draw out my characters at least once before throwing them on my pages officially. I really should have thought of this earlier... with all my characters... before starting the comic...]
Please don’t extrapolate the metaphors here ok. There aren’t any. And please don’t use this without my permission either.
I’m going to colour this as soon as I figure out what colour the roses should be. I probably shouldn’t have put roses in the hair of someone with red hair
This is in traditional art by the way, because the line work was all inked by hand IRL. If you think the lines are weak, you’re right, I totally botched on the inking.
And if anyone’s interested I could do a tutorial on how I did this little baby. It would be titled “How you should never ever do art like this”.
This isn’t mature content is it? Nothing naughty is showing.

I’d probably have a little more confidence in this picture if my dad didn’t keep reminding me how much disdain he has for the thing. I’ll probably like this a whole lot more once I add some colours.
And that bit about not drawing out my characters in advance is true. I’m hoping to get time to sketch all the main characters from Sleep Pending at least once. I only have a vague idea of what my cast should look like in my head and I’m not even sure if I can draw them out properly ignoring the fact, of course, that I really can’t draw anything properly haha. I just need to muster up a little courage to get back to my comic, stop taking it so seriously and remember it’s just for practice.

Posting again, this time it’s old art, but I’m just trying to get back into the swing of things.

An old favorite of mine.  Nyx the little lady who is of Spanish and  French descent and used to be a Janitor before going to trade school and becoming a mechanic.

Plots change, and now she has a more fitting job (sort of) as a sous-chef (sort of).

A picture from way back in my middle school days. Old image is old but I don’t have any depictions of Alice up here yet.

An older commission that I’m still really fond of; if only for the foreground people. I like the details on the clothing. In any case, this picture was the longest I’ve ever spent on a digital piece.

Another picture from my middle school days. It’s Avery and Alice this time.

Uploading some sketches I did with my kiddie markers and crayons. 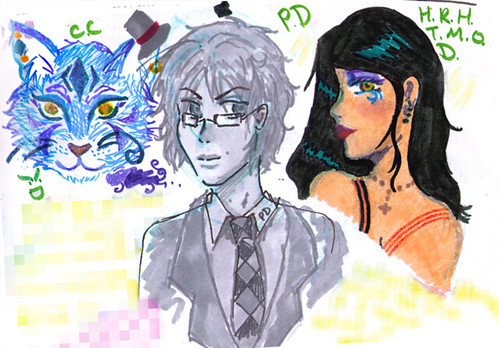 Here we have a blue cat, Philip the prince of Diamonds and Her Royal Highness The Queen of Diamolubs. (That last word should be subject to change – but isn’t.)
These were done with markers from way back when I was just a youngin’, with more teeth than markers.

And here we have a crayon sketch of a mermaid. I have this urge to do something with crayons now. I miss my crayons.