I was going to do some homework and then play some Mass Effect – not necessarily in that order – when my Xbox circle went three parts red. I decided to post some WIPs I’m working on and off on, instead.

Focus on the “off” part of that last sentence. Bah, I wish I had the time to work on this one more.

Started this last year, you can see the first WIP I did over here. You’ll notice the quality didn’t improve but the picture got bigger. Anyway, this gentleman is an OC and he’s kind of a backstabbing, neurotic bad guy. What’s missing [aside from the clothes, appropriate proportions, talent and a background] are a peppering of scars to complete his McNasty look. I should probably give him a bloody nose. He tends to get hit a lot – and he deserves it too – but it would knock him down a peg you know. Wipe that stupid smug expression of his ugly face. I mean, look at his stupid loungy pose and his stupid cancer-stick. Don’t you just want to shove him into a wood chipper? I know I do.

On a slightly less insane homicidal aggressive note, here’s a WIP that’s not really a WIP because it has no bearing on anything; the flats aren’t even right. I just liked how symmetrical it looked I guess. To be honest, I’m not really sure why I saved the image at all. But what can you can do?

Or alternatively; Spot the goldfish.

Did you find the goldfish yet?

This was done with pencil crayons, oil pastel, markers, and lots of crayons from my elementary school days.
I’m not entirely satisfied with this, but at least I finished it right and proper. I was at the university till 1 am pretty much. I hit all the required points for this assignment and ho boy, if I don’t get a rockin’ grade on this baby, there will be hell to pay plenty of indignation and argument forthcoming.

In other news, I had a bit of a blues period which now seems to be over. Good job Angela-self. Now I’m just angry. This is actually good news, because maybe now I’ll harness my rage!energy™ (300 horse power) and get a whole bunch of partying work done this weekend.

I haven’t been very active here on my blog for the last week, but I plan to remedy this.

Today I’m posting random WIPs and sketches from around September of this year –so new-ish stuff.

My shoe. I forgot I needed to have a still life drawn for class which was due in about 8 minutes. Whipped this thing up in  6. Graphite stick? (red filter on gimp because it was boring.)

Just a warm up sketch done in class. Wished I had had more time to work on this, I liked where it was going. Graphite stick again, probably.

Ok, now for the naked people. These are just linearts, no shading was allowed.

My first time drawing live nudes. It was pretty fun, this guy is apparently the city’s best model. Pretty shoddy camera photos though. All gesture drawings. Various materials. The last full body picture is probably my favorite; it was around here that I started getting into the swing of the exercise.

Second model, still line arts,  first woman model. This lady had a whole bunch of body modifications (that I didn’t draw): decorative scarring, tattoos and piercings. She did have some pretty awesome hair though.

First model again. I liked the way I managed to use just lines and still describe plane shifts on the body.

Way back when I only had pencil crayons and paper as art supplies I tried to draw a tiger. It was all going great until I realized the sketchbook paper was too small to finish drawing his head. T_T Alas, what could I do. Its a real shame though, since I really liked where this picture was going. There’s not much I can do with it at this point, so I might as well share it. 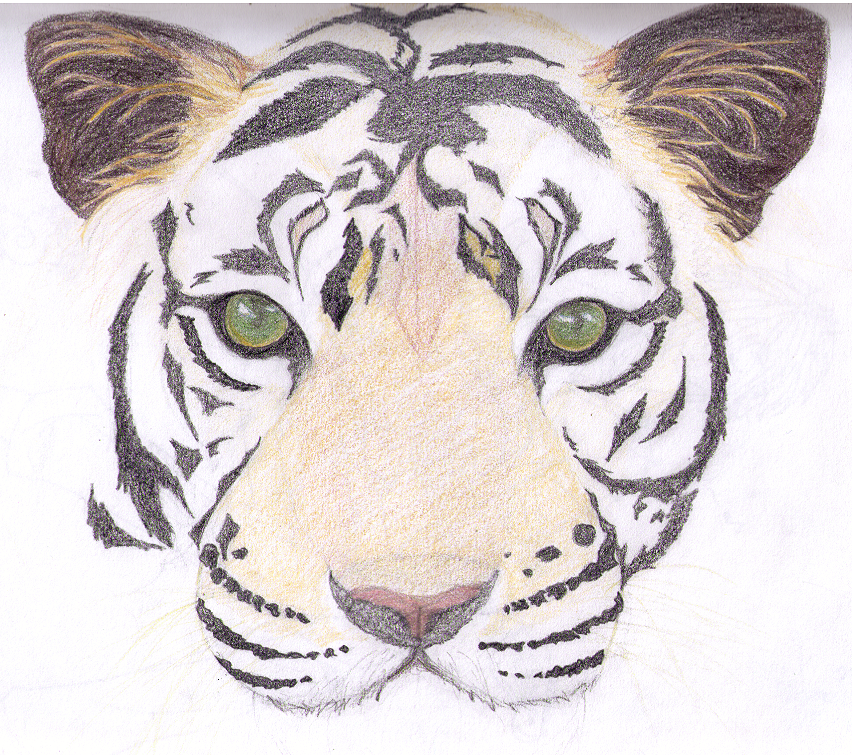 The last post had a link to a perspective tutorial. I am terrible at perspective and evidently need to improve, thus tutorial. Another aspect of drawing that I know could use improvement is anatomy.
I’ve borrowed a few books on this topic and will probably be posting the sketches I copy from it. (Thats the only way I’ll learn right?)

In any case I hope these aren’t too boring. I’ll still be posting non anatomy related art too, so no worries there.

So this page is from one of my sketchbooks, and the image itself was copied from the book: Dynamic Anatomy by Burnes Hogarth. Please excuse the sloppy printing and I fully realize I could be completely off when it comes to the muscle groups. If you see any errors, I would love to have them pointed out. 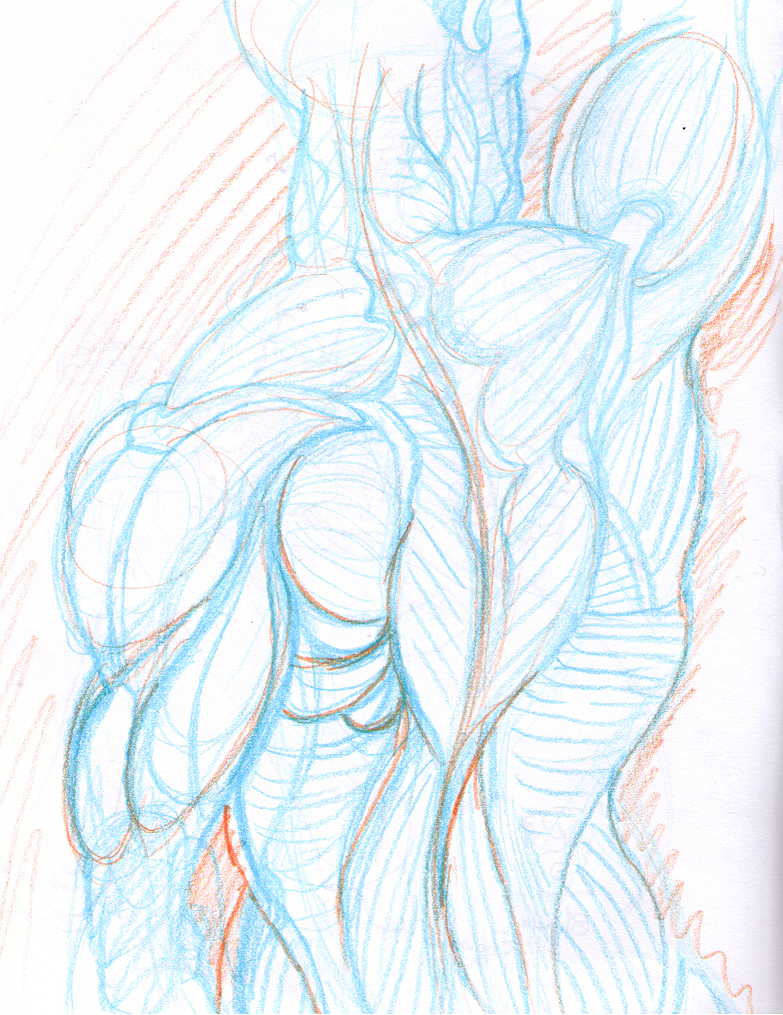