Want to know how I handle commissions usually? Follow the link to see my process walkthrough.

Well, you know the drill by now, Blog. I get one image done, and then I find a whole bunch more on an old external hardrive that are tantalizing work in progresses. What? Don’t look at me like that. You know how I strive — often to counter-intuitive heights — for the feeling of completion and hard drive tidiness.  Besides, how am I expected to resist  something where half the work is already done for me?

I think I did this linework’ two years ago as part of a set. This is my Cheerleading Fairy of Optimism. She was probably supposed to have wings, but it’s very possible I was overdosing on cutesy girly imagery at the time, and just couldn’t bring myself to include them in the final ‘inks’.  I’d forgotten I’d ever drawn hair like that, and it’s kinda nice. Anyway, I’m hoping that putting this little lady up on the Blog will motivate me to A) finish her B) finish the ugly-ass sketch of her partner. By the way, the absurd idea of a ‘Cheerleading Optimist Fairy’ came from a tiny comic I’d done years and years and years ago over here.

Sob, Blog. Why can’t the hard parts be done by other people? Anatomy is so difficult and I don’t wannaaaa. You finish the sketch, Blog, I just want to colour.

Yeah, okay, I’ll stop whining and go get things done. Glad we had this talk. You’re the best.

+1 image to the work in progress category.

Remember when I said I’d done another version of this picture, well, here it is. This isn’t perfect, mind you, but this had been an effort to speed up my illustration process so I decided to leave things a little rough around the edges. I also thought the previous image was maybe a little too sombre, so why not liven things up a little? Not to mention the fact that Canada has entered full on winter mode all up in here and I figured a change of pace was in order. Time to bust out those summer colours!

Let’s see Autumn off with a bang! The kind that sounds like a rivet gun through a window and into a skull.

Don’t have much else to add except this is probably the first illustrative transparent .png I’ve ever done. Looks like I can cross THAT off my bucket list finally. Phew, lucky me.

Oh wow, Blog. Why didn’t you tell me how dusty your fanart section was getting? I would’ve helped you out or something. I mean, that’s what absent minded, missing friends are for, right?

But seriously, I just took a look at your fanart section and I’m kind of embarrassed for you. Has it really been that long since we’ve uploaded something there? And how about those Transformers eh?  Never in my life did I think I was going to like anything about the franchise, but backtrack to last January and oops, I think I fell in amour. And I fell hard.

Speaking of amour, or rather her opposite: Spiting Abhorrence, I can’t tell if I actually hate this image or not. It started out as a shoddy little work doodle that digivolved into something I’d planned to use as a 100 x 100 icon… and at some point this started to happen, and I was powerless to stop it. Around that time I made 3 goals for myself because if this was going to grow into a quasi-finished image, then by golly I was going to accomplish something else along the way.

Oh well. 1 out of a 3 ain’t bad. Why, if you squint and round up, that’s practically half! In any case, I’ve done a different version of this picture and it’s possible I find it a lot less cranky-inducing. In fact, you could almost say it was passable. And if we’re being really generous here, Blog, you could even be so bold as to say that I actually almost like the other version.

If you’re good, maybe I’ll let you see it.

Rung, honey, baby bolts, you should uh, really see somebody about those head insides of yours that are kind of… falling out your outsides.

And once again we see my attempt to learn coloured cellshading failing horribly. Also, where did that upper torso come from? That wasn’t supposed to be there either…

Please start doing what I want you to.

Following along with the last post, here are the rest of the gifts I’ve got.

Below the cut you’ll find:

Remember the WIP I was working on way back in this post? Well after rage quitting and then moping around for 3 months because of a variety of reasons including saving over the original PSD with a lossy .JPG file, I finally found the time to finish it.

This is a gift along with this fic for the artist of the original lines.  In the next post I’ll link the tutorial and the couple of animations I did with this guy.

Remember the sketch I did back here?

Well here are the two main colour schemes I’m waffling between. Do I pick creepy, pale and sickly looking? Or creepy and ethically ambiguous? I’m torn between the two, but leaning more towards Pasty there on the right, since Primeverse Starscream is the palest and greyest of all mechs in the series so far.

Ps: gosh I’m on the edge of my seat with this show, and wondering how they’re going to end up balancing Starscream’s badass moments with his overwhelming patheticness.

Anyway, I could sure do with a vote on what colours looks best.

I present to you: Melonboat McSlices. Even though this didn’t turn out the way I had planned, I still think it’s kind of cute. Also, not bad for my first time using only the pen tool and the gradient tool.

(This picture is way more adorable when it’s squished horizontally, so I’ll leave it formatted the way it is. Click to see the original.)

This big guy is a combination between a: 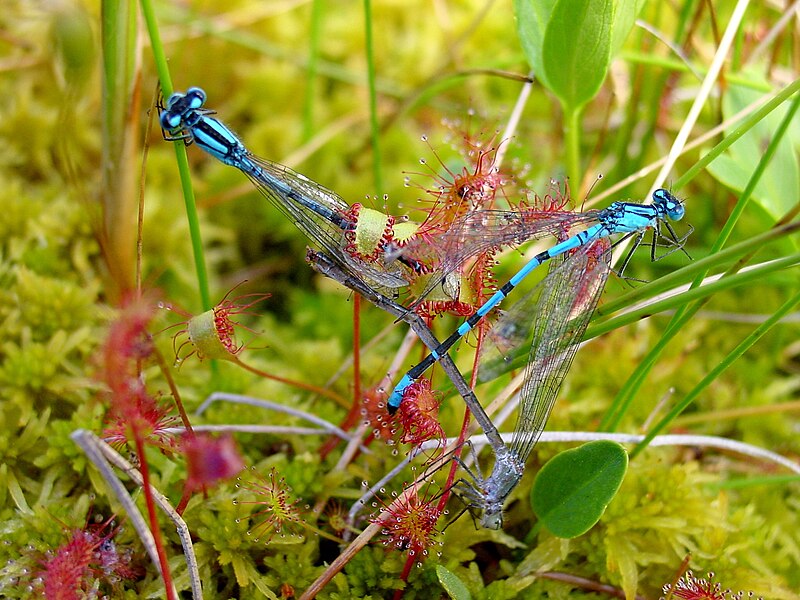 So a : Shark + Watermelon + Venus Flytrap + Sundew (which is a gorgeous name actually)

Now I can finally move on to other things that pull at my conscious less.  One down, only 999,999,999 left to go! Yeah! We can do this, Blog! If we stick together and believe in the power of love, friendship, and forgoing the sweet embrace of sleep, we’ll be able to get ‘er done!! Onward and tally-ho (etc etc)!

I kind of feel like a tool with that last WIP sitting at the top of my blog since I’ve been working on this image every single day after posting that last entry. While my computer’s in for repairs I’m forced to use a friend’s, but I can only do so for 20 minute stints at a time. It’s rough ’cause I just want to get this done so I can finally mail it off. On the bright side I’m at the home stretch now, and the current file is sitting pretty much 97% done. Didn’t have that file on hand, so I’m just throwing this one up here. When I was at this stage it was probably around 78 % done.