super comic city was taking place when i went back to japan in may, meaning there was tonari no cosplay ("cosplay next door") at TFT too X3
i went a few years ago, but this time they expanded the area to include the parks and playland area so i made plans to attend as part of a huge steins;gate group. it was amaaaaaazing!!!!

i didnt want to go alone and be bored, so i looked through the shoots/gatherings and found the steins;gate group was looking for a christina nyan nyan 8D
but the feyris backed out last min so i was asked to cosplay her instead :) one day i'll do christina---

the gatherings in japan are different from the ones here, it's more like looking for members for a shoot so usually there are no doubles and the organizer will specify requirements (must wear wig and make up, no fatties, no underage etc). if the series is popular, there will be lots of gatherings rather than one big one so characters dont over lap.
i prefer this over the big gatherings here----it's so much easier to find people to shoot with and make friends! not to mention the photos look so much better...

anyhow, i was so pleased with our group!!!  they were a funny, friendly bunch XD

LOOK AT HOW COMPLETE THE GROUP IS XDDDDD  i havent had such a big shoot in awhile *tears of joy*
everyone was saying it was rare to have this many charas----X3 lucky me!

the daru was the organizer ^ ^ we all met up at the station, introduced ourselves, exchanged cos cards and walked to TFT together.
they asked where i was from and what events i usually go to, so they were really surprised when i said im from vancouver lol XD;;;; a few of them also liked magi so we magi talked X3 everyone was really nice and funny (;w; ) i miss them baaaw OTL

el psy congroo! (｀・ω・´)ﾄﾞﾔｯ
the rukako (casual ver) really was male lol  he did look like a guy cross playing, but the way he acted and talked was really feminine and i kept saying "man, you're really cute" lol XDDD  real rukako----lol

replicating the cover of the official ref book.  i really like the ferris wheel in the bkgrnd X3
we were all laughing at how feyris looks like a ghost lol  it's like they forgot her and quickly added her in lol

そしてまた 悲しみの無い 時間のループへと (then once again into a time loop without sadness)
飲み込まれてゆく 孤独の観測者 (i will be swallowed as the lonely observer)
the opening image----i love the steins;gate op!  it's so well done and i love hacking to the gate X3

忘れないで。あなたはどの世界線にいてもひとりじゃない。 私がいる。 (don't forget.  you are not alone in any timeline.  i am there)

at first we shot indoors, but it started to get crowded fast so we changed locations

it was much more spacious outside X3 but hot and bright...there was barely any shade so we were baking OTL the rukako was the only one who brought a sun umbrella so we all took turns using it XD;;;; 流石ルカ子、だが男だ

we had the official guide for reference X3  so organized!

after a few hours outside, we moved back indoors for snacks and drinks X3  the event provided them for free-----we took turns eating and shooting X3

it was so much fun chatting and nibbling X3  everyone was super nice even tho we all met for the first time (;w; )  i got along really well with the moeka-----

「フェイリスとご主人様の交換日記にゃん！」
so happy, i always wanted to do feyris and daru-----the daru was perfect lol XDDDD

the alibaba had both masou and non-masou swords! it looked really nice ^ ^

俺の嫁とその嫁ｗ ^q^
they saw my magi straps and bag and said "we are not worthy of your magi love!" lol
the moeka said she saw another sinbad and ja'far who spoke english and was from china, so she grabbed me afterwards but they were gone OTL

ko jaaaaaa---!!!! we magi fangirled together and exchanged cosplay cards XD she liked my kougyoku and asked if i wanted to come for a kou empire shoot, but i couldnt of course (;w; ) so sad!!! she was sweet----

she took a photo of our steins;gate group and i chased her afterwards for a shot lol

we shot for about 7 hours XD;;; was exhausting but really fun!
afterwards went to sizeriya (family restaurant) together X3 ordered a lot of food and it was still 1000yen (approx $10) each! we got wine to pretend to be gilgamesh and kirei from fate zero lol yuetsu! 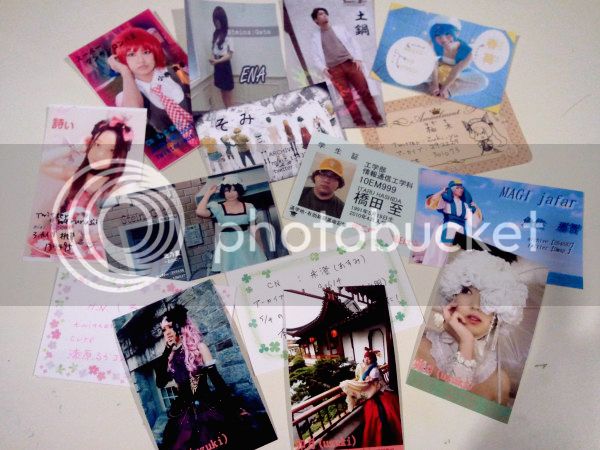 we took the train together and parted ways----(;w; )
it was the first time i had so much fun at an event in japan.  usually i go with john so i dont have a chance to mingle with other cosplayers, and they seem to be busy among themselves that i feel bad askng for photos...but this time everyone was so friendly and had great ideas for photos, poses etc (感´∀｀動)   the photog was also easy to work with and gave us files really fast.  i hope i can meet up with them again one day!!

im getting all my wisdom teeth out tmr OTL  so much for a long weekend...OTL
(entry wrote in Aug, dated back to May)