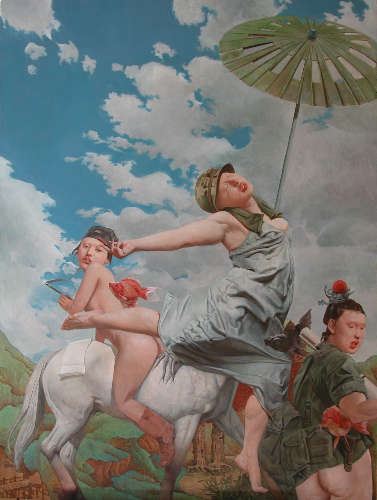 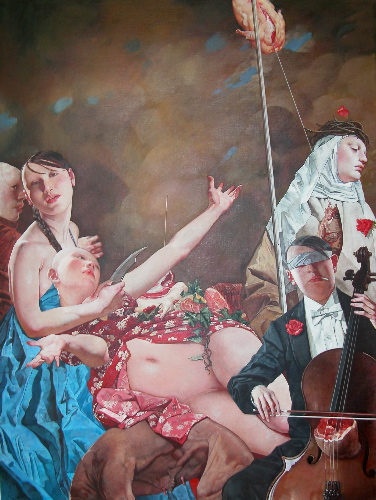 Wei Dong is one of the rare contemporary Chinese artists working in ink and colour on paper. His initial mastery of traditional Chinese technique was entirely self taught and he went on to study western style painting at university.

Most of Wei Dong’s works have a traditional Ming landscape in the background. The foreground is occupied by figures usually out of all proportion to the landscape. The works are full of symbols recalling different eras of Chinese history. There are blue and white porcelains, some carried as army-style water bottles, army fatigues, traditional silks but with hammers and ribbons for a motif instead of something more traditional like dragons, red arm bands from the neighbourhood watch, red books of Mao Zedong’s quotations. Coca Cola buttons as necklaces, dunce caps from the Cultural Revolution, scholar’s rocks.... 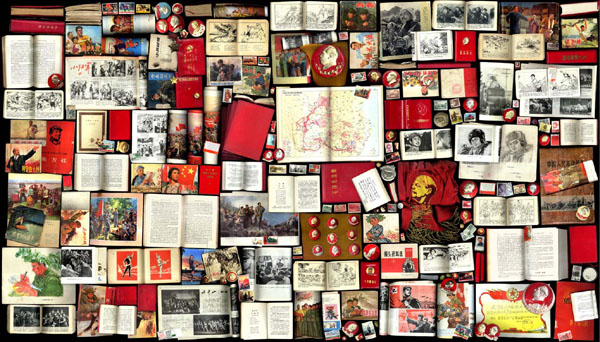 Hong Hao is a highly independent artist, not forming part of any school. His work is innovative, astute and satirical. Much of his work deals with illusion, appearance and preconception. He has spent many years working on a book of maps, called the Scriptures, that reshapes the world according to different forces. For example one map, New World Order, shows the world rearranged geographically and the names of large corporations used to name the countries. Another redistributes land mass according to military and economic strength. Another replaces the names of capital cities with popular expressions or words, yet another shows nuclear arms stationed in selected sites the world over. 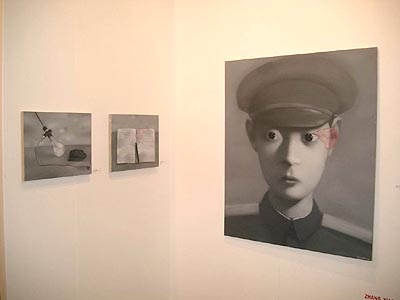 The art of Sichuan province in south China is very different from the art from the politically charged atmosphere of the capital, Beijing. The Sichuan school is far more surrealist and subtly psychological that its northern counterpart. Zhang Xiaogang is the major artist of this school.

Since 1993 the artist has been working on the Big Family or Bloodlines series - works inspired by old family photos. The concept of family in China goes far beyond one’s immediate family and the ties of family blood. Collectivism is an inherent part of Chinese social history and the ties of social and cultural blood are very strong forces indeed. Zhang Xiaogang says of this greater ‘family’ “we are mutually restricted and interdependent”. The ties are complex, subtle and persistent. 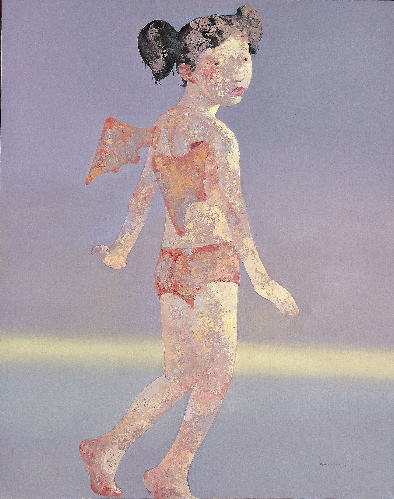 The art of Sichuan, south-western China, is lyrical, subtle, flirting with mystery and more poetic than its bold and extrovert northern counterpart. In Sichuan one feels the great distance from the heavy political atmosphere of Beijing. The lush countryside is one of rice paddies where on torrid summer days water buffalo immerse themselves in pools of water and carpets of tiny, fiery red peppers dry on the roofs of peasants’ houses. The megalopolis of Chongqing, with well over 20 million inhabitants, is a chaotic, noisy, dirty, often surreal and impressive place. The free market has taken off with a frontier spirit in this city on the banks of the Yangtze River. Amid this chaos and struggle is the oasis of the Sichuan Academy of Fine Arts where Guo Jin is a tutor and where he has his studio. The contrast could not be greater between the raw throb of Chongqing and the serenity of the tropical gardens in which the academy is set. 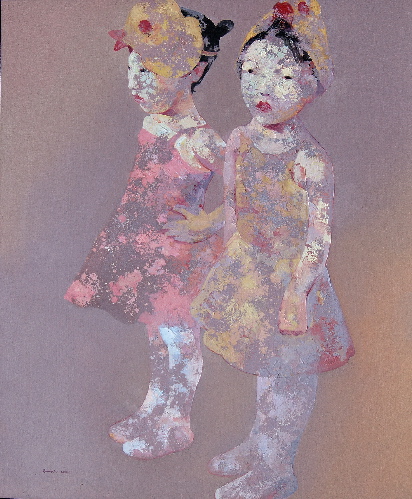 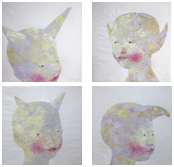 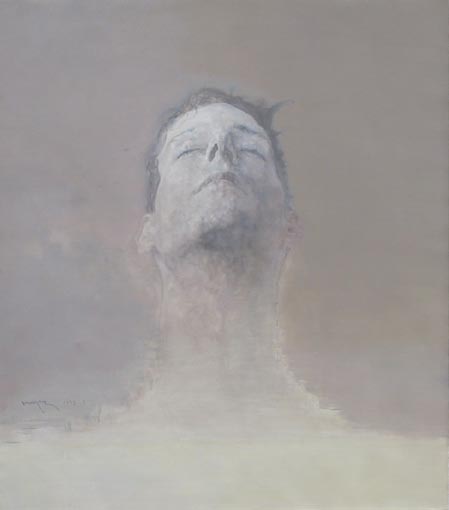 Mao Yan paints portraits but his works have little to do with portraiture as we know it. Although the artist names some of his works after the sitters, he gives them all the title “The Nature of Portraiture”. Who the sitters are is of minor importance. The paintings are tools through which Mao Yan conveys a psychological essence. The artist works very slowly and the works are highly finished, the surface velvet smooth and impenetrably sealed. In this obsessive vehicle Mao Yan captures the energy of a unique spirit.