I don't post much on LJ anymore but some moments feel like they ought to be memorialized here, since they sort of started~ here. Like this one: goldy_dollar and I went to the Wizard World Philadelphia con to see David Tennant and Billie Piper, which was completely surreal. That part is all a bit of a blur tbh -- for one brief moment in time David Tennant and I were touching each other which is truly the important thing lmao.

bazat89 -- FINALLY after all this time I have seen Liz in the flesh! It was awesome and generally too brief.

bluetooth16 was there too! I've met a lot of internet friends over the years but the combo of Liz + Amanda + David + Billie was something else.

I ALSO got stopped by someone named Claire who said she had read my LJ and my fic, which was awesome -- hi Claire!!!

I met up with a friend for lunch today who I haven't seen all summer. She's doing her MA at the university we both went to for our undergrad, so she started classes yesterday. We ended up walking to a coffee shop near campus and chilling there for a while. It was pretty weird. My university is right downtown, so I pass it a lot when I'm in that area anyway, but this is the first time since classes that I've been on campus while it was bustling with students and not... been one of them.

I don't really think of myself as someone who misses school much. My friend Tania told us last week that she's in such school withdrawl that she bought school supplies even though she doesn't need them, lmao. I am not like that. I was glad to be done with my undergrad. But I kind of missed it today? I mean, I guess in part I just missed the purposefulness -- if I was in classes right now I wouldn't feel like such a waste of space, I guess. But I dunno, I think I just like the idea of being in school more than the actual reality of it, probably because for the most part being a student is an excuse to not be an actual adult yet, and right now I am neither a student nor an actual adult.

In less navel-gaze-y news, look what I got in the mail yesterday!: 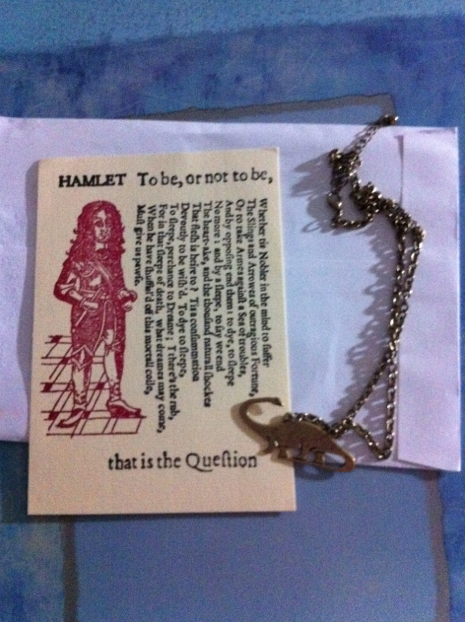 That is a Hamlet postcard and a dinosaur necklace from idk my bff Liz. YOU KNOW ME WELL. It was excellent. I wore the necklace today and got compliments on it from both my friend and the cashier. TY BB.

miss_mishi we are the greatest, happy old birthday

I. I am studying for my history exam tomorrow and I know I have said it a billion times before but I am going to say it again because it is my last chance and also it remains unequivocally true: oh my good God this class is so boring whyyyyyyyyy. I would rather rewatch The Hungry Earth. LOL okay that's a lie, at least this way I can pretend I am learning something.

On the bright side it is done as of 4pm tomorrow afternoon. This cannot come soon enough.

II. So I see there is some kind of Shakespeare ...ficathon... thing going on. For some reason I find this really hilarious even though there is plenty of published Shakespeare fic floating around the Young Adult section of Chapters and sometimes it even gets made into terrible movies starring Amanda Bynes. Anyway in case you wanted to participate but couldn't think of any prompts,

bazcat89 and I have done you the favour of brainstorming some great ones for you.

bazcat89 says: 5 times ophelia cried and one time she didn't

bazcat89 says: what was king lear thinking during his breakdown?

_thirty2flavors says: FIVE PEOPLE ROMEO NEVER FELL IN LOVE WITH (AND ONE HE DID)

bazcat89 says: Five times Puck fell for Lysander, and one time he didn't

bazcat89 says: Sometimes it was hard to figure out the difference between wrong and right. Hamlet/Gertrude. Dark.

bazcat89 says: Lady MacBeth finds herself stuck in a world many world away from her own. LadyMacBeth/Bellatrix Lestrange. HP crossover. (no flames please)

III. Ah, the 30-Day meme is winding to a close. What will I post about when it is done? I guess I will just have to stop spamming your flists multiple times a week. Sad.

Day 28 – An Episode Idea You Created Yourself

Okay I write a lot of fic, but admittedly none of those sound anything remotely like an episode, nor are they something I really think would fit in the context of the show. I don't do enough plot for that stuff.

But in my heart I will always imagine an episode took place in which Ten and Martha met JKR. Because come on that would've been amazing.

Alternatively I also imagine at some point during his emo year of companionlessness, Ten ran into Lord Byron and sulked around on cliffs a lot and ended up inspiring Manfred. Trust me when I say that this makes Manfred like a trillion times more interesting than it actually is.

At some point I assume the Doctor also ran into a rag-tag group of travellers on their way to Canterbury.

Yes all of my episode ideas are literary-related. WHAT OF IT.

So I cannot top

miss_mishi making you a Subtle Sexuality fanvideo. BUT

IT IS YOUR BIRTHDAY

1. It is my second last week at work. This is very strange. It means I start school again very soon, which I am not very excited for. On the bright side, it's only three weeks until my BFF gets back from her exchange trip to France. Whee!

bazcat89 have started a hippie Doctor Who community for people who just want to love all the Doctors and companions and hug space whales without feeling like they've got to pick sides. It is aptly titled

Ask about any fandom I'm in and I will tell you:

If you could stop being so unbearably dull, maybe I could actually write this paper instead of talking to Liz.

bazcat89 will fully appreciate this but omfg: