I was all like 'hmm, maybe I should do that meme I've done every year at New Year's!" And I went to my old entries to find it and LOL apparently I didn't do it last year after all. Oops? But ( Collapse )

Well that was fun.

When I was looking through last year's post to try and find this meme, I saw that my New Year's Eve post included a video of polar bears narrated by David Tennant. This year I bring you AMAZING STINGRAYS:

10/10 for the one that does a perfect backflip.

SO I had promised a megapost review thing about Much Ado About Nothing, and I started working on that tonight. And it is long. I told you I have a lot of feelings. So I'm gonna just go ahead and break it up. I sort of started working my way backwards, and started with "everything other than David Tennant and Catherine Tate", so that's what you're getting in this post. Probably this is the less interesting half to most people, so posting this on a Friday night seems like a fine plan. So here is my giant wordvomit, part 1: 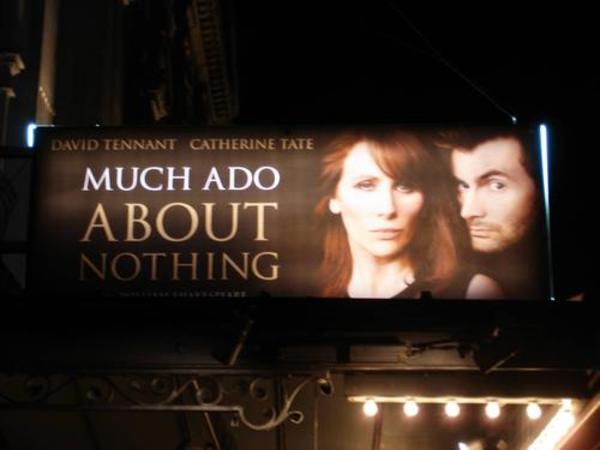 This picture isn't actually very good but I TOOK IT MY OWN SELF which makes it special, clearly.

I ended up going to see the show thrice. Initially I had tickets to two showings, but when I got to England

shinyopals was all "hey wanna try for the lottery" and naturally my response was "DOES IT NEED SAYING?" and we were lucky enough that we both got tickets to the evening show on my first full day in London. Presumably this was karmic balance for the fact that the next show, where we had shiny expensive 4th row seats, we got David Tennant's understudy, Alex Beckett. lol forever, I would. BUT I can't really complain because I did get to see it twice with everyone in their normal roles, including the final performance.

OVERALL: I was completely and utterly dazzled and in hysterics every time and would definitely have seen it a dozen more times given the opportunity. I could try to be objective, but we all know that can't really happen. But I will say that I was already familiar with Much Ado About Nothing and had remembered it as one of my favourites of the plays we'd covered in my Elizabethan Shakespeare class, so I was well-aware of the story and its virtues and failings as well as being able to appreciate in advance the flawless casting. I had really fond memories of Beatrice and Benedick -- particularly Beatrice -- and distinctly unfavourable memories of Claudio and Hero, so I think I went in with fair expectations.

Like most of the Shakespeares I've read and then seen, seeing a good production gave me a much better appreciation for the text itself. I remember sniggering at some of the Beatrice/Benedick lines on paper back in class, but nothing brings a comedy to life like a live performance. The unfortunate side-effect is that while I'm now very very fond of Much Ado About Nothing as a play, I'm also pretty sure the definitive version has now been set in my brain and any subsequent production I watch will be at an automatic disadvantage. The only other Shakespeare comedy I've seen on stage is Twelfth Night, and it was likewise hilarious, and TBH I think I need to start going to more of them because they can be so funny. I love me some Shakespeare dramas too, but live comedy is just so great. Next on my list is Love's Labour's Lost.