Cottage living doesn't get much more fantasy than this, but it's real. I'm chalking this one up under Humans Are Capable Of Beauty:

The whole thing is a DIY project, completed in four months for about £3000, and now it's where they live. There's plenty of information on the website, including building plans and more pictures. Also lists a couple of upcoming projects, if anyone's got some time off and wants to learn to build like this?

"Main tools used: chainsaw, hammer and 1 inch chisel, little else really. Oh and by the way I am not a builder or carpenter, my experience is only having a go at one similar house 2 yrs before and a bit of mucking around inbetween. This kind of building is accessible to anyone. My main relevant skills were being able bodied, having self belief and perseverence and a mate or two to give a lift now and again."
Check out the whole site for more info about low-impact building, sustainable agriculture, and so forth. (via

*
In what appears to be legitimate news, Roswell conspiracy theorists have just been handed the holy grail:

"Lieutenant Walter Haut was the public relations officer at the base in 1947 and was the man who issued the original and subsequent press releases after the crash on the orders of the base commander, Colonel William Blanchard.

Haut died last year but left a sworn affidavit to be opened only after his death.

Last week, the text was released and asserts that the weather balloon claim was a cover story and that the real object had been recovered by the military and stored in a hangar.

He described seeing not just the craft, but alien bodies."
I'm considering an alternate theory that what crashed at Roswell was actually the swarm of gnats currently appearing in John Scalzi's back yard.  But I'm most tickled by the thought that this guy has been waiting sixty years to mess with the entire world. Come on, if you'd been the PR officer at Roswell in 1947, how could you pass up the opportunity?

*
Spike Jonze and Dave Eggers are working on a live-action movie of Maurice Sendak's Where the Wild Things Are. Intriguing. The first screenshot has been released: 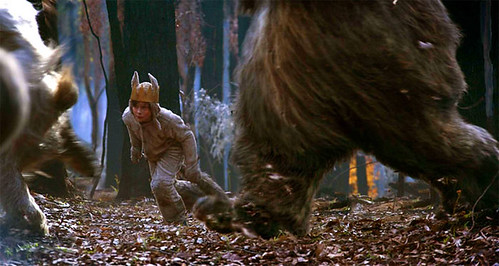 And finally, for those moments when only a prairie dog can express the full dramatic impact of a situation:
People are contributing variations on the dramatic prairie dog website. Most only gild the lily, but I did get a kick out of the Lost director's cut.  (thanks, jennie!)
Collapse