My friend Jane Washburn makes some of the most fantastic creatures in this world or any other. She's just finished work on her latest creation, the Child Empress of Mars (who is based on a Dora Goss story and will be donated to the Interstitial Arts Foundation's upcoming auction). Look at this alien beauty: 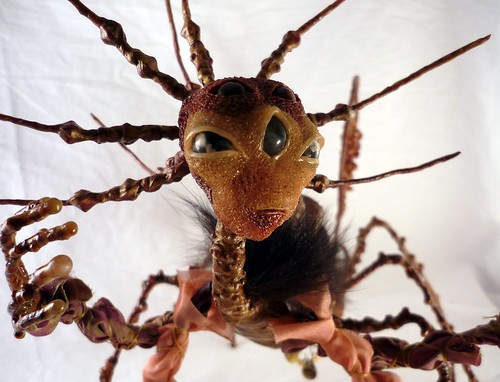 (Recommend you click on the pics to see more amazing detail; queenie looks better and better the closer you get) 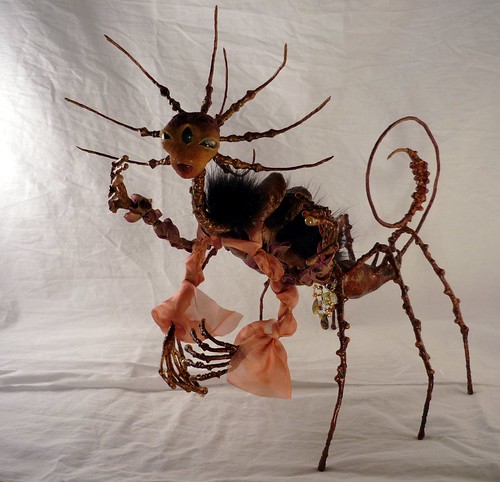 Photos never do justice to the full effect of Jane's pieces, though: what it's like to hold them, how they feel like real live little creatures you might find hiding in the hollow of a tree. So much care goes into their creation; as she works on them, she gives each one a name, a story, a structural integrity right down to the bones. For example, Jane puts little teeth into every mouth, even the mouths that are closed so you'd never see what's inside. And she means for them to be played with; every creature she makes comes with a guarantee that if you break it, you can always send it to her and she'll perform an operation and send it back to you good as new (plus very possibly upgraded with new wings or something; you never know). Because she loves every one of them. And it shows.

Jane is selling off a handful of her critters right now at her Etsy shop Blackbird Marmalade Creations, and she'll be replenishing the shop with lots more of her stuff soon. I wish I could buy them all and fill my house with fantastical wildlife, but for now I'll have to be content with the two currently perched on the chandelier in my library.

OH SHNOOKUMS.
I interviewed Jane ages ago for an article that I've been meaning to write up for-fucking-ever and have still not gotten around to, but I really want to hop on that, because more people ought to know about her work. What she does is something rare and magical.

This has been haunting me for days and I suppose the only way to exorcize it is to release it into the wild: Polly Paulusma's "The Woods".

It's not often that we hear a fairytale from the perspective of the forest.

I saw it all crystal clear
I know who brought those children here
The video features artwork by Rima Staines, who wrote,

Polly's lyrics inspired the forest-as-witness-to-a-dark-happening story ... which calls to mind a rather less than sugary Hansel & Gretel tale and conjures imagined fears of the archetypal forest as well as a real horror of a terrifying bogeyman, in more tangible guises. It speaks too of the turning of the year ...
(The artist's website is so chock-full of images that it takes forever to load, but it's worth the wait, because there's a lot of great stuff over there.)

As autumn approaches, let us take a moment to celebrate some alien artifacts that appeared this summer in the fields of England.

The 600ft monster, similar to a giant Portuguese man-of-war, has delighted crop circle watchers by turning up near Kingstone Coombes, Oxfordshire.

Crop circle-expert Karen Alexander said: 'We have seen butterfly and bird patterns in the past, but this is the first jellyfish crop circle in the world. It is absolutely huge, three times the size of most patterns.'

The design is not strictly a circle, of course, and is a long way from the simple shapes that appeared in the 1980s and gave rise to the name 'crop circle'.

Some argue that the patterns are the work of artists with access to computers and plenty of volunteers - but crop circle enthusiasts say summer nights are just too short to accomplish such complex work secretly.  (via damncoolpics)
First of all, I love that there are crop circle experts.  Secondly, that we are now discussing crop circles in competitive terms.  And thirdly, of course, that someone -- human or extraterrestrial -- took the time to cut a perfect six hundred foot jellyfish into the countryside.  Even if alien technology does make the job easy, that's some artistry right there.

Also impressive: the 350 foot circle that showed up this summer in Wiltshire.

Reports vary as to what it represents, but they agree it seems to be Mayan-inspired, perhaps a headdress or something to do with the calendar.  The Telegraph's headline reports it as "an ancient Mayan symbol, said to be a sign of an impending apocalypse."  What I love about this is the suggestion that the ancient Mayans had an elaborate symbol meaning "Apocalypse Impending!"  How often would you use such a symbol?  (I know, this won't seem so funny in a couple years when the world ends.)

The Nikon Small World prize honors microscope photography.  New Scientist has a gallery of the latest winning work.   Images of tiny, crazy beauty that our eyes can't even see.

Marine diatoms, Pleurosigma (200x), by Michael Stringer.
"Diatoms are plankton with glass-like silica shells and play a major role in removing carbon dioxide from the atmosphere."

Can I be alone in my longing for inarticulacy - for a cinema that refuses to join all the dots? For an a-rhythm in gesture, for a dissonance in shape? For the context of a cinematic frame, a frame that - in the end - only cinema can provide. For the full view, the long shot, the space between... the gaps... the pause... the lull... the grace of living…

The figurative cinema’s awkward and rather unsavoury relationship with its fruity old aunt, the theatre, to her vanities, her nous, her beautifully constructed and perennially eloquent speechifying, her cast iron – corset-like - structures, her melo-dramatic texture and her histrionic rhythms. How tiresome it is, it always has been. How studied. The idea of absolute articulacy, perfect timing, a vapid elegance of gesture, an unblinking, unthinking face. What a blessed waste of a good clear screen, a dark room and the possibility of an unwatched profile, a tree, a hill, a donkey...

How I long for documentary, in resistance - for unpowdered faces and unmeasured tread - for the emotionally undemonstrative family scene - for a struggle for unreachable words, for the open or even unhappy ending? The occasionally dropped shoe off the heel, the jiggle to readjust; the occasionally cracked egg; the mess of milk spilt. The concept of a loss for words. For a State of Cinema - as the state of grace that it affords us - in which nothing much happens but all things are possible, even inarticulacy, even failure, even mess...

The work of one Wilhelm Staehle.  More on the main site.  (thanks, Shana!)

foto_decadent offers a collection of photographs by Eugenio Recuenco, who does some gorgeous work playing off myth and fantasy:

More of his work is available on his website, such as these advertisements for Lavazza coffee:

,,,and assorted other pictures.  I want to visit these stories.

I stopped reading the His Dark Materials series after the second book -- not out of pique or anything; I started out loving it, and then after a while just sort of forgot to care what happened next -- so I haven't been paying much attention to all the hype around the upcoming movie. However, since my f-list is full of people playing the "meet your daemon" game, I figure some of you may also like looking at this gorgeous alethiometer made by the artist at Curious Goods: 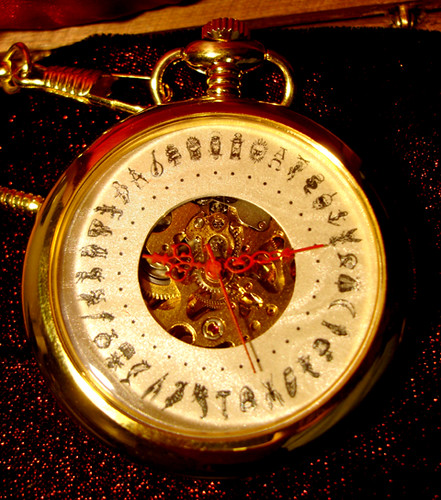 The entire Curious Goods site is astonishing, a personal site full of wizardly creations and information about the making of them.

Pär is in San Francisco all this week at the Game Developers' Conference.  If anyone reading this is attending and would like to catch him there, he'll be the tall shaggy-haired Swedish man with the Three Rings crew.  When not at the conference, he'll be mostly working at the Three Rings office -- which may actually be worth visiting just to check out the gorgeously industrial-weird interiors, including custom-made squid desk, pirate desk, Cthulu desk, etc...

Terri Windling posts on the Endicott Studios blog about artists in Tuscon getting evicted from their studio space:

It's the same old story: artists move into a derelict neighborhood and make it vibrant and interesting, which attracts developers and raises real estate prices, and then the artists themselves are priced out.

...please support the artists and art facilities in the communities where you live. It's very difficult for even well-established artists to make a living on their work once the cost of materials and gallery fees are factored in; affordable space to work in is crucial. [...]  With real estate booming everywhere, it's harder and harder for artists to find places to work -- and yet our communities would be impoverished places without artists in our midst.

Check out her post for details and photos of work by artists coming out of the Tooleshed studio.
Collapse