Just rounding up a few odds and ends:

* The Boston Globe has published a striking series of Obama photos, taken on the campaign trail.  Includes the fist bump picture that's making the rounds:

"Your earnest, self-important prattle has gotten on Gen X nerves for decades. But now we finally get it." (via Gwenda)
* For 34 Years, Eugene Allen Carried White House Trays With Pride. Now There's Even More Reason to Carry Himself That Way.

* More than a million American have been laid off in the past month, and it doesn't look to be getting better anytime soon.

* In Somalia last week, thirteen year old Aisha Ibrahim Duhulow was stoned to death by 50 men in a stadium packed with 1,000 spectators. She died pleading for her life, buried up to her neck in a hole in the ground. Why? Because she reported having been raped, which got her accused of adultery.  (Which still leaves the question "Why?")

...Okay, I don't want to end on that note.  Thankfully, there's always the pressing issue of... PUPPY INITIATIVE! 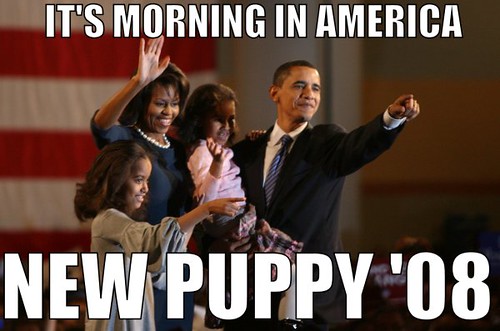 "YES WE CAN!"
Collapse