This month the Guardian ran a special series of major Greek myths, retold by classics scholar James Davidson.  The retellings are fairly straightforward and don't diverge much from the sources, except in style.  As it happens, I've been reading Greek mythology aloud lately with my son, and the thing that strikes me most about Davidson's pieces is that they're full of graceful humanizing touches and detailed images that make for good oral storytelling.  For example, in the story of Persephone:

One afternoon, lonely in his vast underground halls, dark Hades heard the girls' laughter high above his head. He sensed the pull of the roots of the plants as their flowers were picked, as if his heart were being tugged. He made a resolution; he would be lonely no longer.

I grew up on Greek mythology and never get tired of these stories, but what I'm really enjoying are the forewords to each section.  They're written by people from a variety of fields, according to their own perspectives: psychological, classical, feminist, historical, poetic.  So what we get is a lively mix of approaches to mythology.  From Germaine Greer's foreword to the section called "The Power of Love":

Love, for the ancients, was the force that made happen everything that did happen. Every movement was prompted by desire. Nowadays when an apple falls to earth we call the force that sent it gravity, without registering the truth that gravity is just another name for attraction.

Historian Michael Wood, in his foreword to "The Trojan War":

Over time the myth becomes a framework on which the tale-tellers can hang almost anything. Myth sometimes grows out of fairytale, and is then used to shape real events, as a way of telling history. Conversely it can begin with a historical core that in the end is transmuted into fable. But at its heart, as with Homer's tale of Troy, is a realistic view of life, of love and hatred, cruelty and heroism: the unchanging facts of the human condition. This is an insight missed by the recent Hollywood Troy epic, which, for all its computer-generated wizardry, ignored the unsparing heart of the tale when the scriptwriter had Paris and Helen run off together into the sunset. The point of great myths is that we all know how they will end - and in the great Greek myths, there are no happy endings.

The Greek Myths, at the Guardian Unlimited.

Poor Britney Spears is all over the "news" again today, which reminds me of something worth hearing.

(It's not about her per se; nothing interesting has ever been said about Britney, with the exception of Chuck Klosterman's Esquire interview.  If you're curious, an edited version of that article can be found online here, though you should start with an excerpt from his uncut original draft, published in his book.  The Klosterman piece was written almost five years ago and explored Britney's image at the time, which dates it.  But after all these years, it remains the single non-obvious, non-dreary thing I've ever seen written about her.)

Anyway, what I wanted to post isn't about Britney, except tangentially.  It's a bit of late-night monologue from Craig Ferguson's show that I happened across on YouTube last year.  I don't watch late-night talk shows and barely knew who Ferguson was, but he won my heart immediately, not only because of my weakness for Scottish brogue.  For anyone who's gotten up close and personal with alcoholism, this is some real good stuff, told with great humor.

In celebration of Greg Van Eekhout announcing the exciting news that he's sold his first novel, I hereby offer this isolated track of David Lee Roth laying down the vocals for "Runnin' With the Devil", off Van Halen's self-titled 1978 album. Because nothing says "hooray" like Diamond Dave singing "WHOOOO-EEEYAH!" 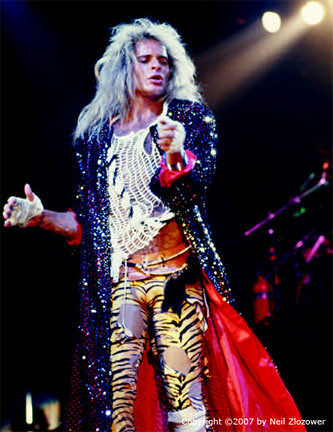