It seems to be the thing at the moment to be amused by newspaper bills - the posters with breathless headlines that papers give to their street vendors and newsagents to help shift copies.

The Evening Standard Headline Crisis 2005 set on Flickr has such classics as “TOOTHPASTE CANCER ALERT”, “MAN BEHEADED IN LONDON STREET”, “IPOD HEALTH ALERT” and “DOG STOLEN AT GUNPOINT”. But anyone who's ever seen the “Sub“, as we called the Standard when I was on the Kilburn Times, will know to expect that sort of thing.

More obscure, and therefore far more amusing, is the Cardiff Terrifies Me blog. This targets the bills put out by the South Wales Echo and all I can say is I'm awful glad I don't live over there: “DRUNK TEACHERS FLED FROM CAR CRASH”, “SEX TRAFFIC PAIR LOCKED UP”, “'MY BROTHER KILLED SHIRLEY'” and the chilling “MUSLIM PUPILS IN SAUSAGE ROLL BLUNDER”. Note that the last one says 'blunder' and not 'blender'.

So here's my sole contribution, published here to show that while some parts of the United Kingdom are hotbeds of sex, drunkenness, dog theft and inappropriate sausage meat, other areas are just a little bit calmer.

From the West Briton, mid November, Helston in Cornwall: 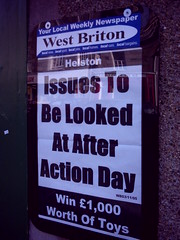 Issues To Be Looked At After Action Day
Isn't it exciting? Isn't it intriguing? Doesn't it just make you want to rush out and buy the paper RIGHT NOW?
Me neither.

Quite a weekend, that was - an extendible one, apart from anything else, as it spilled over into the surrounding days.

Thursday evening saw us hit the gym hard. Strange things are happening to me as a result of this “working out” business - I have cheekbones again for one thing, although admittedly only faint ones. I think I like it…

From the gym we headed up to my parents' in North Hertfordshire for the night. Both of us spent the day working and then we trekked north, getting stuck in traffic on the M6 at Birmingham and arriving chez

ju1es at half past midnight - long after she, Woody, Emily and all other sensible people had turned in for the night. It meant that Saturday morning was a bit rough - but was infinitely preferable to driving up on the Saturday morning from home, an alternative that would surely have resulted in our arriving, out of breath and panicky, about 30 minutes before the gig on Saturday night.

Ah yes. The gig. Last year Jules came down to us and we went to see The Human League in Reading - and when we met the band afterwards she gave Phil Oakey a right bollocking for not playing Manchester that year. Evidently she put the fear of God into him, because this year we were able to make the return trip to see them at the Manchester Apollo. I think I'll do a separate post on the gig, as posting setlists or whatever will break the flow here. Enough for now to say that it was a great evening, followed by a late, hoarse morning.

Most of Saturday, Sunday and Monday were spent visiting family up there - it was, as ever, great to catch up with everyone. Monday lunchtime, however, was devoted to meeting up with

gerriparker - noodles at Wagamama, for those who like to know about such things. I've met her in the 'real world' once before, but only briefly, and Beloved Other Half hadn't at all. Gerri was excellent company and also rather gorgeous - from time to time her journal intimates that she's perhaps a little larger than she'd like to be, but what she fails to mention is that she has the height and style to carry it off so you don't notice. We talked until the dessert dishes disappeared, and could have talked for longer still had there been time.

The run home to London on Monday night was uneventful, enlivened (not) by passing my Tuesday workplace exactly 12 hours to the minute before I was due to walk through its door and return to reality.

Which I did today.

Both ends of the same day - the sunrise and sunset on November 14th this year. (Links go to Flickr, where you can see the full-sized versions of these photos.) 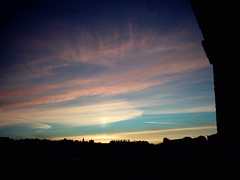 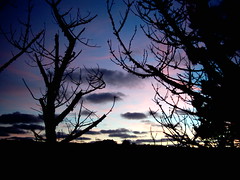 …and down.
Sunset across the Cot Valley, western Cornwall, from the garden of “The Canyack” National Trust holiday cottage on Nov 14, 2005 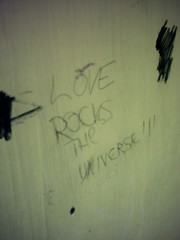 Love rocks the universe…
…at least, it does on the wall of a public toilet in Helston, Cornwall.

When I was a child, it was axiomatic that all small boys were supposed to want to be train drivers when they grew up. The truth, of course, was that none of us actually did hold that ambition and probably no small boy had done for a least a decade. It just took a while for the grown-ups to catch on.

It doesn't take a genius to work out why we all wanted to be footballers instead. It wasn't hopeless admiration for Kevin Keegan's haircut, and nor was it a precocious understanding of the parlous state of British Rail and its management. It wasn't even the constant drip-drip of derision levelled at the venerable British Rail sandwich.

It was, quite simply, the death of steam.

Certainly, at my primary school we enjoyed having a major rail line run past one side of the playing field - we all owned copies of Locoshed, the train spotter's bible, and we gasped in wonder when the new InterCity 125s were introduced (HSTs, we knew them as) because their streamlined looks were so different to anything we had ever seen before.

Like Concorde and the Triumph TR7, they represented the bold, bright future of the late 1970s - but they weren't steam trains, and they never could stir a young boy's soul in the way the Flying Scotsman and its brethren had stirred our fathers. Looking at them didn't make you want to be a train driver or a pilot or Tony Pond, it made you want to be a graphic designer.

Well, now I'm 37 years old, not seven, and I've missed my chance to fly on Corncorde - but I've won a design award (of a sort) and driven a TR7. And, from time to time, on holiday, I like to travel on steam trains.

Because that's what boys do.

Anton the Anonymous Engine
Don't ask me what type of engine this is - I don't know that sort of stuff. All I can tell you is that, like all the photos that follow, it's on the West Somerset Railway.

The train now arriving…
A scene from decades long gone - apart from the gaudily-dressed tourists - as the Bishops Lydeard service pulls into Minehead station.

First Class
Trains on volunteer-run lines tend to have a mis-matched assortment of carriages - whatever they've been able to beg, borrow or otherwise accumulate. This is the WSR's first class accommodation.

Tickets, please
The WSR uses wonderful stiff cardboard tickets, of a sort unseen for years. It's a pleasure to produce them for inspection - whoever you are…

“Back her up a bit, Ted”
At Bishops Lydeard, the volunteer engine driver does technical engine-driverish things under the gaze of entranced tourists.

Briefly encountered
Outside the Bishops Lydeard waiting room, waiting to see if anyone needs a cinder removed from their eye.

This is what it's all about
Nothing on earth looks, sounds or - especially - smells like a steam locomotive. (This pic, like the last, by Astrofiammante)

Some photos from the recent camping trip. Despite being cut short, this was an unexpectedly refreshing and much-needed break - even if I did seem to spend most of it on the phone, juggling different bits of work that suddenly started mounting up. Before we went away I was enjoying not having any work on, but was also starting to worry where I might find some for the future. Those problems seem to have evaporated now, and I have meetings in town tomorrow and Wednesday.

While away, we spent four nights camping and then two in a B&B, and had been planning a few more under canvas before the recall home. We had extremes of weather, walking 10 miles in fierce sun one day, then enduring thunderstorms and thick fog a day or two later. Beloved Other Half is writing about it in detail, so I'll not repeat her here, I'll just content myself with bombarding you with photos at the end of this post.

Since we got back, most of my attention's gone in two directions. I'm trying yet again to kick-start the rebuilding of my personal website, which has been two years in development and is still no nearer completion - can anyone recommend an easy-to-configure CMS or templating system that produces standards-compliant code for 100+ static content pages? I'm also engaged in the serious nostalgiafest represented by plugging a turntable into the PC and digitising all the vinyl I bought when I was a hormonal teenager. There's some weird stuff in there, and some cringeworthy stuff, and some long-forgotten gems. Anyone remember Neasden's Queen of the Beehive, Mari Wilson?

Going away tomorrow until Monday, up to Norfolk to spend some time on – or, at least, near – the boat. Rang the yard and spoke to Alan, the head boatbuilder, who said they'd bring her from her mooring and over to their side of the river.

Hopefully we'll have better luck with the weather than in the past. It rained non-stop when we hired her from the yard back in 1993, and when we took her out one weekend after buying her the wind was so strong she went sideways despite being under full engine.

Ah well, if the worst comes to the worst we can always stay in a hotel and go and peer at her occasionally through the rain…