Off to hospital again yesterday (the Charing Cross, in Fulham Palace Road) for a check-up following my leg and elbow operations earlier this year.

This has been a long-running saga, dating back to at least early 2003, which came to a head this year when I finally persuaded them to get to work on me with a knife.

To summarise, some time in 2002 a numb patch appeared on the outside of my right thigh. In Feb 2003 a neurosurgeon diagnosed me with meralgia paresthetica and put me on a waiting list for surgery. He warned me it would take a year or so before anything happened. Over the next few months I had some conductivity tests (electrodes jammed into the leg) which confirmed the diagnosis, and settled down to wait.

After that, nothing happened.

In late 2006, with the leg worsening and new problems developing in my left elbow, and a few other unrelated health things also worrying me, I got bored waiting and went for private consultation, first with a GP and then with a neurosurgeon, who stuck a rocket up the backside of the NHS and got things moving again.

More tests and consultations followed (mostly repeats of the 2003/04 stuff) then in July they finally did the cutting. Transposition of the left ulnar nerve and decompression of the right cutaneous nerve of thigh, for those who thrive on details. 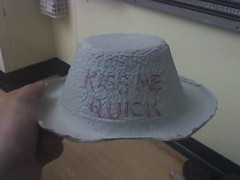 I woke up after the surgery to mixed results. The elbow? Perfect. No more finger-twitching or numbness. The leg? Disaster. Much more numbness and a world of pain. Some very unhappy weeks followed, involving painkillers, anti-inflammatory drugs, horrible limping, sleepless nights, black despair and a walking stick.

Eventually, some of the numbness and most of the pain receded. It still hurts occasionally, but there’s variety in what type of pain occurs and it never lasts long, so that’s an improvement on balance. The numbness is significantly worse than before the operation, but I can still detect pressure, even at the place with least sensation, so I’m no longer worried about not knowing if I’m burning myself against a radiator or whatever.

And there’s more than a chance it will improve further over the next few months.

Which is where I was yesterday when I went off for what turned out to be the final stage in the saga. A quick five-minute consultation with a jolly woman I’d never met before and that was it - discharged, with an open invitation to contact them again if there was any deterioration.

A bit anti-climactic, actually. I don’t know what I expected, but this was something that had for a long while been a major part of my life (or, during the early years, something lurking on the edge of my attention, impossible to entirely forget) and it just fizzled out. On balance, I’m glad I had the operations done - the elbow was a success, the leg about break-even with hope for further improvement. But where was the full stop at the end, the handshake with the surgeon and the “good luck, old chap” to see me off?

I wasn’t sure what to do with myself afterwards. Having dragged myself down to London on just three and a half hours sleep and then waited around in a hospital corridor for a late appointment, it seemed too soon to go straight home again. On the other hand, I was dog tired, had nothing in particular to do, and wanted to be back before a workman arrived to fit blinds to two rooms in the house.

I pottered up the Fulham Palace Road, peering in through the window of the Spitfire Polish restaurant at the Battle of Britain memorabilia, then trailing around a bookshop with no great enthusiasm. Eventually I refuelled with a cheese and mushroom crepe and a coffee from a hole in the wall in the Hammersmith shopping centre and descended back onto the Tube. A train was just about to leave Kings Cross when I got there, so I was relieved of the need to think about anything and away I went. A brisk walk from the station and I was home in time for lunch.

If I type this really fast it may just sneak under the wire and count as a March post, thus keeping up my new average of a post a month in 2007. Pretty grim stuff, compared with the several a day I used to manage when writing this thing was fresh and new in late 2002.

It's not like I've been writing nothing at all, though - the anthology with my story in creeps ever closer to becoming reality. That's its cover over there, beside these words. Neat, huh?

Got an email from the publisher today - they've now got a MySpace page, heaven help us all. For those who are into that sort of thing, it's at myspace.com/norecordpress.

In other news there was this, which just felt like one of those things that needed to be done.

So, well, yes, it's been a while since I last posted. Quite a bit's happened, actually.

For starters, we're probably only a month or so away from the publication by a small San Francisco press of an anthology of short stories that includes one of mine. More on that when I have more, but right now I'm tremendously excited, because it's the first time in a very long time that any of my fiction will have been published.

Also taking a lot of my time is MyBathroomFinder.com, the first step in our fledgling business empire. It's starting to find its feet and generate traffic. Not a lot of income yet, but it's early days.

If you're used to my usual writing style you're probably waiting for me to qualify it and say something like “well, what I actually mean is that 5000 of us were declared 'winners' but only one person got the prize and it wasn't us”.

Well, as it turned out it was us.

It's been a very weird couple of weeks, with a lot of nice messages of congratulations from people (including some of the ones who came closest to winning it themselves) and some emails and phone calls from friends I'd lost touch with and who saw it in the news.

There's an awful lot to say about it, so I built a small website with the story and a link to my Flickr photos. Go explore, Digg it or stick it on del.icio.us or whatever if that's your sort of thing - I'll still be here when you come back. And believe me, no matter how surprised you are at the news it's nothing to how stunned I am, as I look back at it.

It's 2am and I just woke from a bizarre nightmare in which Beloved Other Half, myself and dozens of others climbed up the wire fence that used to run alongside the access road to our flats in order to escape the floodwater surges from a tsunami that had run up the channel of the Thames. Among those around us were a Big Issue seller I sometimes chat to on Upper Street, Islington, called Tony, a minor character from the movie Notting Hill and a TV news reporter (identity unknown) who was broadcasting live, despite not having a camera crew, and who screamed “it's my Uncle Charlie's funeral” at the moment of greatest danger when we all thought we were going to be washed away.

Can't sleep now, so I might as well try to get some work done.

Ah well. Back in London after a month away.

Wonderful time in Cornwall, just managed to skirt the edges of all the bad weather (thanks to everyone who texted / emailed to ask if we were okay). Did have a powercut one night in a storm though.

Was working in Islington yesterday so I had the whole commuting experience, lovely. It seems I've got a bit thin-skinned from all that time on a hilltop with no-one around but Beloved Other Half.

Driving to the other client today, near Wycombe, which should be easier. Then back to Islington tomorrow.

Managed 19,000 words in the novel-writing challenge I was attempting - nowhere near the 50k target but a pleasing amount anyway, especially as it took me to a natural break in the narrative. Beloved Other Half has done rather better - everyone go say 'well done' to her, okay?

How's everyone been while I was away, then?

This journal began on 7th November 2002 on DeadJournal, where one version of it is still running. In order to keep track of friends, there are now also versions on LiveJournal and Journalspace. In due course I'll shift the whole thing over to my new site at andthenhesaid.com.

So. Three years of doing this journaling / blogging thing. Seems a shame to let it fade away.

Better write something, then.

November: spending entire month on holiday in Cornwall, trying to write a novel. Almost no internet access. Back home at the beginning of December.

Goodbye and Godspeed, Tony - see you on the other side. (Advice: don't tell Bertie about the grand you made until after he's got the first round in…)

One cup of coffee - just one - and it triggered a headache that I still can't shift. Not even one, in fact, because I didn't finish it.

Ill. Cold that had more or less gone has returned with vengeance. Working from home today.

Life very strange at moment, and not all that good either.