I’m no fan of the Labour Party at all, or its doings, but I was impressed by one item among the usual drivel in its latest local newsletter.

This county council division - Hitchin North on Herts County Council - will be a tricky defence for Labour next year, as the district council wards have been trending Tory for a while now and the People’s Party’s vote has been plummeting.

The ‘Contact’ leaflet that came through the door yesterday was the usual fare, claiming credit for this, criticising that, and piously hoping for the other. Nothing that couldn’t have gone out under the logo of any of the other three parties in the area, and probably has.

A nice personal touch came in the form of an obituary to a long-serving stalwart of the local party, and then there was this:

Local Bearton ward councillor Martin Stears has recently entered into a civil partnership with his long-time partner Ian Handscomb. Martin has changed his name to Martin Stears-Handscomb, and we wish them every happiness for a long future together.

What impresses me is the fact that Labour put this on a leaflet - it won’t win them votes in this marginal division (which includes Stears-Handscomb’s ward), in fact it will probably lose them instead. But they still did it.

It’s always unsettling when your opponents do something that impresses you, and which you know you might have thought carefully about before doing yourself (even if you’re certain you would have, in the end, done it too).

But it’s still a brave step.

Of all the undignified ways to shuffle off this mortal coil, getting sucked into bottomless mud while clearing litter in your local park has got to rank right up there.

Which makes my misadventure yesterday, when I found myself sinking fast into the bed of a misleadingly inoffensive stream that I’ve known since childhood, all the more embarrassing.

Litter picking in the Purwell

Once a month, Beloved Other Half and I head down to the nearest large park to join a litter clear-up organised by one of our neighbours.

Usually it’s just a case of scouring the park boundaries, the edges of the footpaths and the area around the skateboard ramps, using council-provided pickers - blue plastic claws with long handles - and black bin bags.

Two dedicated chaps from the Green Party usually take care of recovering beer cans from a pond off at the far end and bicycles from the river that runs along one boundary, providing a home to moorhens, water voles and (inevitably) rats.

But yesterday neither of them came, so me and Beloved Other Half got to play in the water instead.

As the photo shows, it’s really not a deep stream at all. The bed is a mix of hard sand and shingle on the fast bends, with a couple of inches of soft mud overlaying it in the quieter stretches.

So we made good progress, fishing out one bicycle and filling two bin-bags with cans, chocolate wrappers and endless waterlogged packaging from loaves of bread, presumably dumped by people who had finished feeding the ducks.

Marching along the stream bed, separated from our colleagues working elsewhere, hidden from the park on one side and the road on the other by high banks, it was easy to forget we were in a town. All rather idyllic, actually, apart from the litter.

Where it went pear-shaped was when I decided to take advantage of a break in the vegetation on the opposite bank to get out, regroup and maybe cash in my bin-bag for an empty one.

A few paces towards the middle, the stream bed got a lot softer. A couple more and suddenly my right boot was full of water. I shifted my weight onto my left leg to retreat, felt that one start to sink too, went back onto my right, and immediately that leg was knee-deep in the mud.

Twisting round to call out to Beloved Other Half turned out to be a bad idea - although I was able to keep my left foot from going more than a couple inches into the mud, my right started sinking further.

I was going down into the mud, and I didn’t know how far I’d go before I stopped - or even, for a horrible few seconds, whether I’d stop at all.

I did, of course. I was crouching on my left leg with my right in the mud all the way up to my thigh and water lapping around my unmentionables, but I’d stopped sinking.

Hadn’t a clue how to get out, though.

Beloved Other Half came over to help, but started sinking herself before she could pull me upwards. And when she stayed a safer distance away and pulled laterally all that happened was that she ended up on her hands and knees in the water.

I had visions of a humiliating rescue by the Fire Brigade, followed by an equally embarrassing jokey piece in the local paper that would have made a muddy grave the preferable choice.

Beloved Other Half, meanwhile, was taking advantage of the fact that I was plainly not going anywhere to dump all the bin-bags and litter-pickers on or near the bank - a couple of times so far we’d come close to the lot floating away downstream, shedding rubbish as they went.

Eventually, I hit on a plan that worked. I was stable enough in the mud by now to be able to bounce up and down on the toes of my right foot without anything too bad happening. This broke the suction and gave me a shot at getting free.

Beloved Other Half pulled and the right leg (complete with boot, to my surprise) started to emerge even as the left started to sink because of the shifting of the weight. Not a problem - I had enough momentum to keep moving and stop it sticking, and soon I was on the bank, with evil-smelling black gunge slopping out of my boots.

After that, it was the devil’s own job to get them off - much comical huffing and puffing and tugging while lying by the side of a main road - followed by a quick (and probably unnecessary, given what we looked like) conversation with one of the volunteers, explaining why we leaving, and a barefoot walk home, clutching our dripping wellies.

Then tea, hot shower, more tea and a solicitous visit from the organiser to check I was OK - which I was, part utterly freaked out by the suddenness of it all, part embarrassed by the sheer silliness of it.

Any real danger? No, probably not - all pretty trivial, really, now it’s over. But the moment of eye-popping terror when one leg was gone, and for all I knew the other was about to follow it, will not be quickly forgotten. 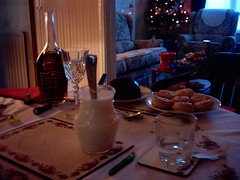 Today I was working near Wycombe, about 15 miles away as the crow flies (I reckon) from the oil refinery fire out Hemel way.

Incidentally, I have a chequered relationship with Hemel Hempstead - I was fostered there for a while before I was adopted, and later as a schoolboy I lost control on the town's dry ski slope as we all practised for a school trip to Austria and woke up in hospital with a ruddy great gash on my head. Still got the scar, still can't ski.

Anyway, today I left the office to go to lunch and the sky looked like someone had taken a spraycan to it. Perfect blue, but with this dirty great badger's stripe of foul grey cloud coming straight up the middle of it from the general direction of Hertfordshire. I was in sunlight, but half a mile away it was dusk.

I had my lunch at a particular petrol station where the coffee's good and, as I sat in the window, the light went - just like that, as if someone had hastily turned it off with a dimmer switch as they rushed to leave. The wind had changed direction slightly and now I was under the cloud.

The light wasn't quite like anything I was familiar with. It wasn't like evening, it wasn't like the total eclipse back in 1999, it wasn't even like the midnight sun in northern Iceland. It was brown light with no warmth to it, the polluted light of the Apocalypse.

And this was 15 miles away - what must it be like in Hemel?

BBC Online has collated some great photos. Unfortunately they're in a pop-up, so they're difficult to link to, and the two best are from the notoriously litigious Getty Images so I'm not reposting them - you'll have to follow the links. This one looks like the war in Afghanistan, this one looks like a scene from Bosnia, and this one is straight out of a Hollywood disaster movie - London in its dying throes. Freaky.

In unrelated news, over at No Home-like Place

shermanilla has started a tribute to her father, who died recently. As befits her status as an author and illustrator, it's compelling stuff. Go visit.