I use the Chinese sector of the Internet, I finally do! For real! Never had a reason to before. But holy crap, how obviously different our mentality is. When I see all those pop-ups, adverts, blinking flash buttons, all I want to do is run. Close my browser, disconnect my modem, shut the machine down and reboot in safe mode. And I definitely screen content.
Way before Firefox AdBlock Plus was invented, we of the Internet surfing tribe trained our eyes to bypass blinking buttons of spam, taught our brain to disregard advertisements' riot of colors. We went, and we still go, for what we came for on a page. Some black or blue, on white or gray, with some tastefully done, color coordinated adverts lurking on the sidelines. If we are on a comic strip site, where there is a friskier mood in the air, there will probably be a modest flash ad of a computer game. Blinking red on black? Why are you on a pr0n site while at work?

This approach will get you nowhere on a Chinese site. You can spend all the time you want getting through meaningless little text links to the left, and modest go-nowhere buttons to the right. But HOWCANYOUNOTSEEIT!!!?? This, yes, the honking huge green 3D button, that is dancing right in front of you, blinking orange text and jumping up and down. The one surrounded by useful information typed in glittering, swirling, sparkling pink. Right under the running banner, exonerating the virtues of rising early, drinking milk and buying Brandname cellphones, in gold upon scarlet. Oh, you thought it was spam. Your brain refused to acknowledge it... You tried to get your cursor around it... Well, good luck with that. This is the magic button that opens a new tab with more dancing blinking shit, from where you go to another one, and there be your info.

Then you have to go back to your browser, and close all those bloody windows manually. I remember sharing a computer with some girl back in China, I think she invited me over. I showed her something in English, and then went further down the linky-link path. Naturally, my info just flows with it. No need to open everything in a new window. How appalled she was that I can't retrieve pages from half an hour ago without googling for them. And even the fact it took five seconds couldn't placate her. Really those guys are the Internet magpies.

I also found Harry Potter and the Philosopher's Stone in Mandarin, but I'll have mercy and won't post it here.

This week we had a series of long and tedious lectures about safety at workplace, safe handling of various reagents, samples and chemicals, glove safety etc.

Returning to the lab on Monday I met the guy responsible for waste disposal, trying to figure out a way to stopper a huge, full container with your old plain sticky tape. For a second, those are volatile, dangerous organic components we are talking about. That thing will leak before it reaches the truck, let alone the dumpster.
On Thursday - an old, decrepit looking man, creeping down the corridor with what looked like four open rubber-maid containers full of steaming soup clutched in his hands. Yes. Liquid nitrogen. And he looked like he is about to drop it.

Thinking of it - I like liquid nitrogen a lot. Whenever I'm late for work, I go by the huge cisterns and the portable pressure pumps. Nice climate control, at +35C outside. And watching those masters students handling it, wearing shorts and toe sandals, and no lab coats, pulling samples and dripping it all over the laminate floor, destroying it - pure fun.


I'm getting ever so evil there :)

There was a bus to Jablonec at 8:10AM on a Sunday. I should know, we used it to loose the money-bags. Where is it midweek?

Nowhere. And does the info-person tell you about that? Of course not, his only entertainment at this crappy job is to see flustered tourists flail around helplessly.

Anyway, the next bus was caught halfway across town, and a second trip to Jablonec, the glass beads source, commenced. Do I love taking road-trips by myself, or what? Have no idea what the boyfriend was doing, but I had fun staring out the window, just looking at rolling hills, apple-trees in bloom, and roadkill so unlike to what we have back in the Holy land. Mostly rabbits and birds, here.

This time all went smoothly - of course, local lost&found knows nothing about our wallet, and it was crazy hot, but shiny stuff was purchased in bulk, I snagged a free coffe with my order of cut glass, and there were even ducks in the local riverstream. Lucky day.

Note: If the bus on the way back to Prague leaves the station half an hour before it was supposed to, the driver looks like he normally works brick construction, two miles uphill from brick storage site, and all the passengers smell like they do, too - most probably, it is not the official bus to Prague.
Oh, sure, it will get you there, eventually, but it will take three times as long. The road will be magnificent, true. Countryside cottages, rustic simplicity, all that heady stuff, with a generous helping of manure. If you are lucky, the bus will get stuck tail-gating a tractor dragging a whole stinking heap of it.
I was lucky. Didn't I say everything went surprisingly well?

It's great that no matter where you are, or what you do, there is always one constant in your life. There will always be a hole-in-the-wall Chinese eatery, where there will be people who'd understand you. Provided you speak standard Mandarin, of course.

Seriously, I understand Czech well enough to get married in Mnichovice, which means, not at all, because the agency took care of everything. It's like the bastard child of Polish and Gobbledygook. The highest level of linguistical comfort yet was courtesy of your friendly neghborhood Chinese family.

Oh, and 0.5l of beer at ten thirty in the morning? Perfectly OK.

It's spring, and I get Sundays off. So I felt compelled to wear a longish skirt while runing errands - very atypical, since I'm a die-hard pants wearer. Of course, upon exiting the sanctuary of my appt I was promptly reminded exactly why it is so.
Men. And not the nice selection, either. Filthy, stinking specimens, with sweaty shirts, oily eyes and muddy shoes. Last rainfall was three days ago. Even if you like my skirt, please refrain from rubbing all over it. It's 10AM, and you reek of beer, no, I won't give you my number.

Jesus, I was hoping I'm safely out of the prey age-range. Needless to say, my pointy elbows worked overtime today.

Experience tells me, that the most powerful way of ridding oneself of unwanted attention is attitude -
Never leave the house happy or smiling. Bonus points for murderous rage seeping through every pore, but rare are women above teenage age who still retain it to sufficient degree.

Third - get either very fat or very skinny. As in, morbidly obese, or emaciated. I've been both, and combined with proper gait and judicious choice of garment, it works beautifully.

Since nowadays I tend to be at my best behavior when I get the heck out of the appt, my job has dress-code, and I'm just fat enough to have the oh-so-grabable tits and ass, life is bound to get weird as the days lengthen.

Here is to martial arts!

1.Degree of success in entry level laboratory tech position lies in direct proportion to ones' ability to stay focused like a Ritalin abuser, whilst spending hours sitting on your butt, watching paint dry.
1a. Inability to react in appropriate and timely manner gives you fancy-shmancy cancers.
1b. Your coworkers' inability  to do so does too.
1c. Often, paint stays wet throughout the day. Then you have to freeze it, and come back next day to start over.

Addendum: I f**ken' love my job! It's like I have a pair of damn angel-wings!  Woo-hoo!

2. Even one day a week gig as a friendly retail assistant warrants making a shirt that reads "Please no sneezing on hired help. Thanks, your friendly retail assistant"
2a. Failing to do so ensures you will spend your lab time watching paint dry through fever induced haze.
2b. Since this is a government institution, nobody but the new girl are crazy enough to come in while sick. Thus, you must be simulating.
2c. See 1a.

Addendum: people who sneeze on sales clerks in fancy food shops should go choke on hazardous chemicals somewhere. You would not have died for want of tom yum soup that week-end, sir, I assure you. Get well, and then go shopping for non-essential items. Simple.

I always hated the idea of having an aquarium, because I was sure it's like being violently forced to watch a lame TV show, with fish inbreeding and passing on in cycles. Not so, apparently. It's rather interactive, there is a lot of fiddling and tinkering with it, and if you choose hardy fish that don't breed unless all of their minuscule demands are met, there won't be too much of the "Miracle of Birth/Death" shenanigans. I still wish I could go fish-less, though.

Got the idea for the whole system from here: http://www.aqua.org.il/forums/showthread.php?t=143365

Basically, when you need a steady stream of CO2 and you don't want to spend  couple of thousands on professional injection system, you'll have to rely on good old yeast to do the job for you. A bottle of Coke, a bottle of Sprite, (I remembered I hate Coke halfway in), 5 cups of sugar, teaspoon of east, a stop-valve, a T-valve, some tubing, silicone glue and a drill, and lo and behold,  I've got ( pearlingCollapse ) going on! The CO2 is fed directly into filter's nozzle (hello, power-drill!), mingles in it for a bit, and is ejected all mixed up with water. We'll see how it goes, hopefully it won't stay stuck in pockets there.

Since there won't be any fish in there for quite some time, I went all out and attached two bottles simultaneously. No fish - no fear of carbon dioxide poisoning. As it is, I'm doing the "fish-less cycle" with rotten stuff, hoping to achieve as low a body count as I possibly can. Will have to add fish sooner or later - their crap is beneficial to plants, apparently.

Of course, all that CO2 needs to be processed, and for that we (meaning, our aquarium plants) need light. This setup came with a measly 15W old fluorescent, that I ripped out. Cut up the lid, screwed some planks together - rigged the lights to a whopping 1W/L.

And to think that I used to find aquariums boring! 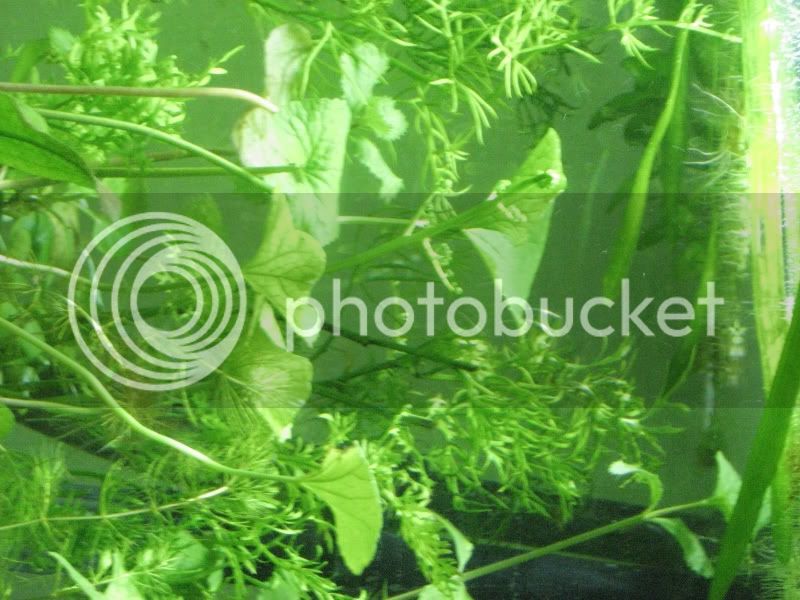 If I was still in school,  I would so use this. There is at least a term paper, right here.

By popular opinion, this guy's voice is the reason Tamil cinema was so fervently religious for so long, and his unjust incarceration brought about an end of an era. After him it was all soppy love between lowly humans, basically. Personally, I like the secular productions more, but that's because they are easier for foreigners to relate to. After all, boobs are universal.