Casey and I went to Best Buy today. While we were both looking for things we each wanted, somehow I got told my things weren't worth it. This always seems to happen when we go shopping; I always forget that's why I shop alone....somehow my things are "frivilous" and his are not. I wanted to find two things: a new camera and a wireless print server for the compy. Hey, I make a lot of money, I can afford it. (Okay, it was $79 after rebate). I can't stand unhooking Casey's printer and wire it up to my laptop, then having to sit on the floor since there' no other room anywhere else (cord's too short, desk is full). To just push a button while downstairs on the couch? Brilliant. But noooo, it was "silly" since I don't print that often. Uh huh. So apparently, it's fine for me to have to make a whole production out of printing, since I don't do it often enough for it to be a regular problem. Then, I found a great camera, the Nikon Coolipix. It's $329 ($60 less than the Cannon I saw first), 6.2 MP, 5x optical zoom, 15 shooting modes (that seems reasonable, ne?), it was neat. Even really small, and black colored. But that was also deemed frivilous. SO, despite the fact that I have wanted these two items for a year, that I could use them (you'll see why in a minute), and I had the money to pay for them (hello christmas money!), I was shut out. *cry*

In a hilarious scene, a worker called for "code-1 assistance" to the loading bay one. He sounded really fired up about it, but he shouldn't have. It was only code-1. Hee hee. Code-1.


Now onto the FO-IPs!
1. Clapotis from knitty. Here she is so far. Made in a super-soft, super-pretty purple, turquoise, cornflower varigated yarn. I cannot wait for this to be one, I really am excited by it.


2. Hat in progress for the boy. Yes, despite his hatred of "expensive" technology, he gets a hat. It will have the black mage as promised, probably in duplicate stitch. It's a roll-up brim in 3x2 rib stitch, which is why it looks horrendously long. It's in Knitpicks "coal" colorway of the wool of the andes. Here is a good example of why I need a new camera. Extreme close-ups of the knitting are not always good.


3. Fancy, fancy, I-can't-believe-I-acutally-bought-this yarn. It was on sale, too- baaaad idea! Louisa Harding Impression, in a gorgeous purple and blue colorway. Yeah, it's a ribbon yarn, with a mohair thrown in to make you swoon. It reminds me of van Gogh paintings and makes me happy every time I see it. In case you are wondering, here's the differences in the colorways. This is going to be either a new clapotis (it's what I originally wanted to buy), or a very fancy lace stole. Haven't found a good pattern yet, though.


So far, that's all I got. I made a list of the stash. The list is long. The stash is good. 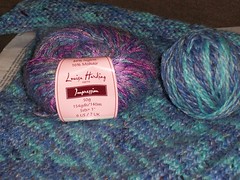