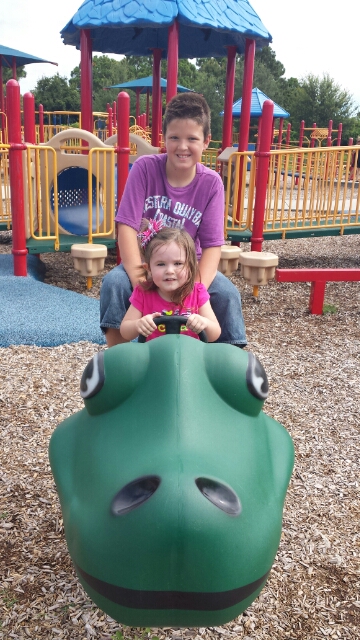 oh boy where do I start?! I'll go in sections.  lolJayden:  22 days and he will be nine! We have big secret bday plans for him. He is doing GREAT! He started 3rd grade. His bff is in his class & loves his teacher.  I have yet to meet him though.  Jayden's 2nd week of school he got the tummy bug thats floating around. He missed one day of school but seems 110% better.
He's growing like a weed but is still my same sweet Jayden. :) Delilah: ohh my darling little Lilah. lol she is nothing less than a handful! She will be THREE in November.  WAH! She just recently started preschool... its our first daycare experience but she is doing sooo well! She's little miss social butterfly! Talking like crazy and completely potty trained. :) Me: hah! well.. January I met a guy online. Named Jason. Goes by Jay. I was sooo overly nervous about actually meeting him. At this point, I pretty much gave up hope on the whole dating scene.  Finally I broke down and met him. We went to dinner. It was a week night. He was so sweet. & quiet. I could tell from day one that he was a very genuine person. He's the ladies first, open car doors NICE type. I am so used to rude inconsiderate buttholes it was really weird. lol Anyway. We went on date after date. Each time I would still get butterflies in my tummy around him. We have done SO much together.  Boston Red Sox game, NKOTB concert,  Celtics game, Universal trips, Sea world trips.  I did more with Jay in the first 3 months than I ever did with say Jeremy or Stas! As of right now Jay and I have planned for him to move in with me when his lease with his brother is up. He might as well live here anyways... he's stayed here every night for like 2 months.  If he doesn't come here then I go to his house. My kids absolutely adore him. And he loves them to pieces.  I love him soo much! It feels so nice to be wanted and loved again! Stas: started dating a bitch named Annie 1/1.. the same girl he ripped my heart into pieces over. She is the controlling jealous insecure type. She hates me and told Stas I couldn't talk to him anymore. Thanks skank for tearing apart 14 years of friendship! lol long story short..  they broke up Wednesday.  KARMA!! :)  Jeremy: still a lazy asshole.  Dating a girl who USE to be my friend. Sorry but you don't date ex's and friends ex's. Sooo there went that friendship! I don't like her anyway. He is refusing to pay me the child support I ask for so court will be soon!! He's in for a ruuuuude awakening! :) I'm sure there's more.. but I'm on my phone and it's pretty hard to update from here.  Until next time!

So I broke down & made a profile on plenty of fish. Wednesday to be exact. That evening I get a message from someone I know (embarrassing) ... Along with 3647586 other messages. We start small talking & I told him he should take me out for a steak dinner date (jokingly)... He agrees. So we start talking.. Nonstop. All day. He's the sweetest thing. Previously I met him once through a mutual friend... So I didn't know much about him.

We went on our first "date" last night. It was perfect. We laughed. We made fun of each other. When we went our separate ways he sent me a text.. "I didn't want the night to end yet" ummm cute! He's so freakin sweet. And seems so genuine. This is exactly what I needed.

More horrible things keep happening. I've lost all my friends.. So I have no one ever to talk to... Therefore I keep everything bottled up inside. That's not a good thing for me at all. I'm tired of hurting & I'm tired of crying. Something's gotta give. Hopefully sooner than later.. Bc I don't know how much more I can handle!!

Hopefully those aren't entirely too huge. =)

I should really start writing in here... I think it'll make me feel a whole lot better. Whether its read or not.. It'll be off my chest for the most part!! Lol

Things just haven't been good. All year so far. Blah!

I am in major need of updating/venting.

I just don't know where to start. Baby Lilah ^ this is probably how big she was last time I posted.

If those are crazy big I apologize!!! <3

Guess who!! Hahaha wowww I don't remember how to use this thing!

It'll take me days and days to update on everything that's happened to me. Last I updated Delilah was itty bitty. We're huge now! Jayden too. I'll have to update when I have more time and I'm not on my phone. =)