Crossposting this here because Facebook is hot garbage if I ever want to find this again...

I had a bit of a love/hate relationship with Chris Cornell and Soundgarden. It's true that I've called him a "studio artist" because I heard more than one example of him performing live where he was definitely not "on", including some live Audioslave that I'm not kidding when I say at first - I thought was bad karaoke.
For Soundgarden I always disliked how they didn't seem to know how to end a damn song. Far too often their songs would meander and repeat over and over until finally dying out. Take "Black Hole Sun". A lot of people will site that as one of his/their best. They are wrong. That song is bullshit. More than...I REPEAT...MORE THAN the final 90 seconds of that song is nothing more than the chorus over and over and over and OVER making the song feel overplayed before you've even finished it once. And face it - so many Soundgarden songs are like that, to the point where I now refer to it as "Soundgardening the ending" when I hear other bands do it.

But the bottom line is this: I really loved a lot of Chris Cornell's shit.

From a show I was at this past Sunday...even if you're not a fan of the D (I'm looking at you

phearinc) the video is worth a watch...

The comments at the beginning were in regard to the Packer loss which, were pretty funny if painful...though it's good to see THE FOOTBALL GODS SMITE HIM ALMOST IMMEDIATELY. Changing the lyrics was a nice addition and I loved the commentary at the end.

I bet bear was driving.

How to Win Hasselhoff's Heart
Originally uploaded by leo..
I went to Best Buy this past Tuesday to pick up a couple things...I have to say it was kinda difficult to stop myself from purchasing this.

I'm pretty sure this article was written specifically for

I don't know why, but the sound effects really made this one for me: 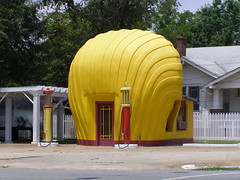 Man: Five on the red one.

Me . o O ( Enjoy your < gallon and a quarter of gas and - judging by your car - your approximately thirty-five miles of driving, sir! )


Oh, and to continue my series on people who piss me off because they're turds and won't let me "blog this" photo...This was the photo I wanted to use for this post. Lots better, isn't it? ...but alas it was not meant to be...it's getting to be a bad trend, I couldn't even use this one. I mean, come on, really?

I don't even really like the picture I did get to use.