Dream theatre roles?
John Proctor (The Crucible). I’d like to play him. Richard III. That’s enough for you to be going on with. Hamlet’s the main one in my sights at the moment. Oh as well as my character in Blood Mountain, as well as my character in The Lost City of Z and something else that might come between that and Hamlet which I can’t talk about now… It’s not Star Wars no.

Source My kingdom for a Holmes: detective duo both play Richard III

Richard Brooks, Arts Editor Published: 6 April 2014
Cumberbatch and Freeman are the latest in a line of distinguished actors to tackle the role
IT IS the mysterious case of Sherlock Holmes and their parallel careers: Benedict Cumberbatch is to star as Richard III in a television film while Martin Freeman is preparing to play the hunchback king on stage.
Cumberbatch, who has appeared as Holmes in three series of the BBC drama Sherlock, has been cast as the last Plantagenet ruler in a film to be shown on BBC2 next year. Freeman, who plays Dr Watson, will portray the monarch in London from July this year.

As well as appearing together in Sherlock, both actors also star in the Hobbit trilogy — Freeman as Bilbo Baggins and Cumberbatch as the voice of the dragon Smaug. The two actors, who are close in real life, play unlikely yet devoted friends in Sherlock. Cumberbatch’s Holmes is a seemingly emotionless obsessive while Freeman’s Watson, a war veteran, is his fiercely loyal but often exasperated foil.
Both actors have been nominated for Baftas for Sherlock, with Freeman taking the best supporting actor award in 2011. The drama is scheduled to return for a fourth series, probably in 2016.
Laurence OIivier played Richard III in a 1955 film adaptation (BFI)
In an interview with The Sunday Times in 2012, Freeman said: “Ben’s been generous about how, when he first met me, he thought: this is going to work. He was very pro my doing it and I felt the same. For whatever reason it kind of worked immediately between us.”
While Richard III will mark Freeman’s first professional Shakespearean role, Cumberbatch has already appeared in several of the Bard’s plays, including As You Like It and Romeo and Juliet in London in 2001-2. He will be playing Hamlet at the Barbican in London next year.
Cumberbatch’s Richard III is one of three BBC television films being made by Neal Street Productions, which was co-founded by Sam Mendes, the stage and film director.
Cumberbatch, 37, and Freeman, 42, are the latest in a distinguished list of actors to tackle the role of Richard III, whose reputation as a physically deformed machiavellian villain was sealed by Shakespeare’s depiction. They include Laurence Olivier, Ian McKellen, Alec Guinness, Al Pacino and Kevin Spacey.
Experts said there were various ways for Cumberbatch and Freeman to portray the hunchback king.
“Shakespeare called this play The Tragedy of Richard III, his only history play with the word tragedy in the title,” said Rae McKen, director of another forthcoming Richard III in London. “Too often he [Richard] is shown as psychotic. We need to get over more what went wrong in his life.”
Dr Phil Stone, chairman of the Richard III Society, said: “The play is propaganda, an attempt by the Elizabethan court to show the populace they were better off under the Tudors.”


И кстати:
Dream theatre roles?
John Proctor (The Crucible). I’d like to play him. Richard III. That’s enough for you to be going on with. Hamlet’s the main one in my sights at the moment. Oh as well as my character in Blood Mountain, as well as my character in The Lost City of Z and something else that might come between that and Hamlet which I can’t talk about now… It’s not Star Wars no. 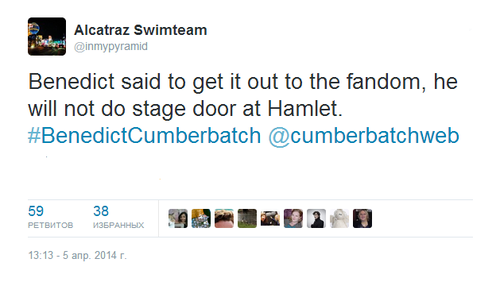 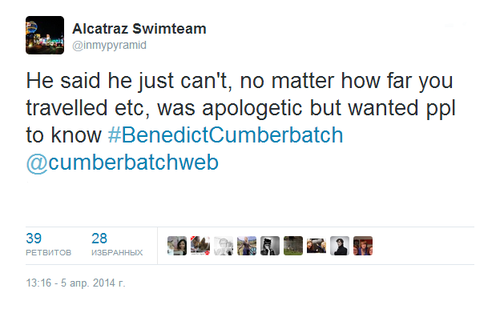 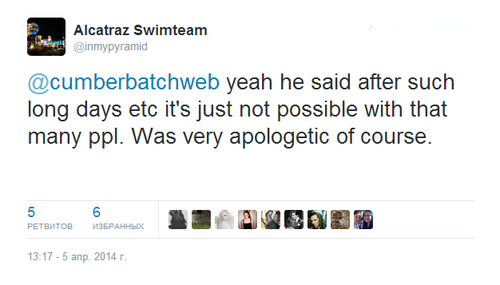 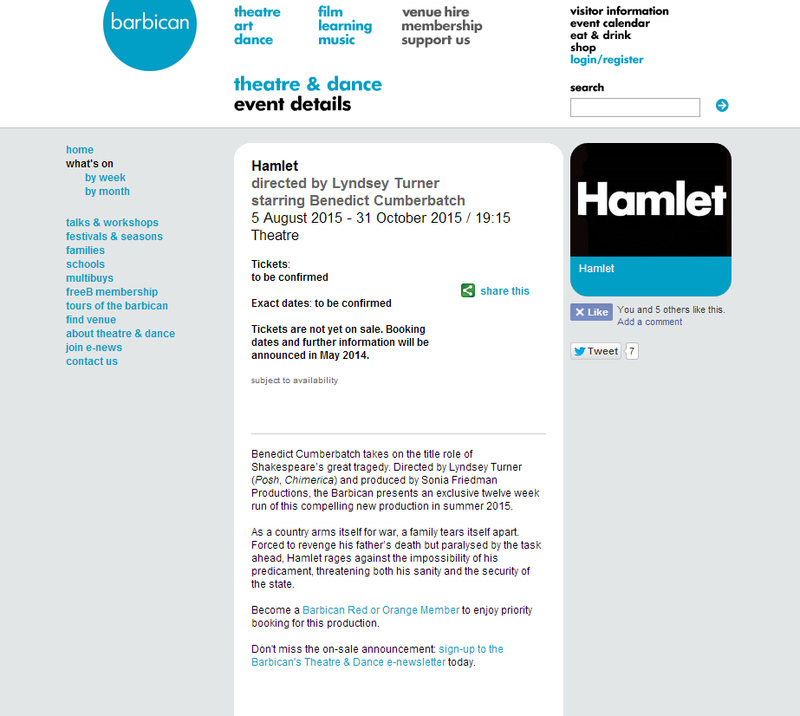 Baz Bamigboye in the Mail is reporting that Benedict Cumberbatch will be doing Hamlet at the Barbican Centre in August 2015.

He’s a hugely reliable theatre source (he broke the news about Matt Smith in American Psycho & also was the first to report about Frankenstein back in the day).

Official news next week apparently. The Barbican is a huge huge venue with 1162 seats so there will be tons of tickets available for everyone.

[Daily Mail]Sherlock star Benedict Cumberbatch has firmly committed to playing Shakespeare’s ‘sweet prince’ now that a home has been found for his Hamlet.
I can reveal that the play about the troubled Dane will begin performances in August next year at London’s Barbican Theatre.
It had been hoped that Cumberbatch’s Hamlet would run this year, but we’ll have to wait — mainly because of a paucity of appropriate venues, but also thanks to the packed schedules of Cumberbatch and Hamlet’s director Lyndsey Turner.
The show will be the centrepiece of the Barbican’s 2015 season.
When approached on the matter, Hamlet producer Sonia Friedman said: ‘I can confirm that we are in final negotiations with the Barbican,’ but she declined to comment further.
However, others associated with the production told me Cumberbatch was better able to clear a big chunk of time in 2015 — he has agreed to commit to a 12-week run in the Barbican, and at least six weeks of preparation and rehearsal time.
Cumberbatch will also meet periodically with director Turner to work out how to approach the Bard’s landmark drama, which is seen as a test of an actor’s stage ability.
The 1,166-seat Barbican Theatre is big enough to house Cumberbatch’s growing fan-base, which has exploded since the success of Sherlock on BBC TV and the star’s appearances in blockbuster movies such as Star Trek: Into Darkness, August: Osage County and the Oscar-winning 12 Years A Slave.
He last appeared on stage at the National Theatre in Frankenstein, directed by Danny Boyle.
Cumberbatch has a major movie coming out in the Autumn called The Imitation Game, which is expected to figure in the next awards season.
He portrays the World War II code-breaking mastermind Alan Turing, while Keira Knightley portrays one of his Bletchley Park colleagues. 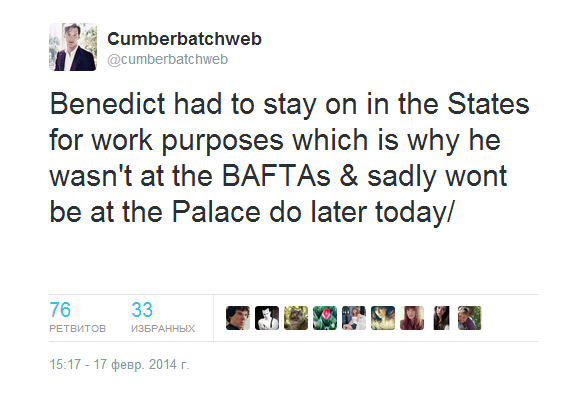 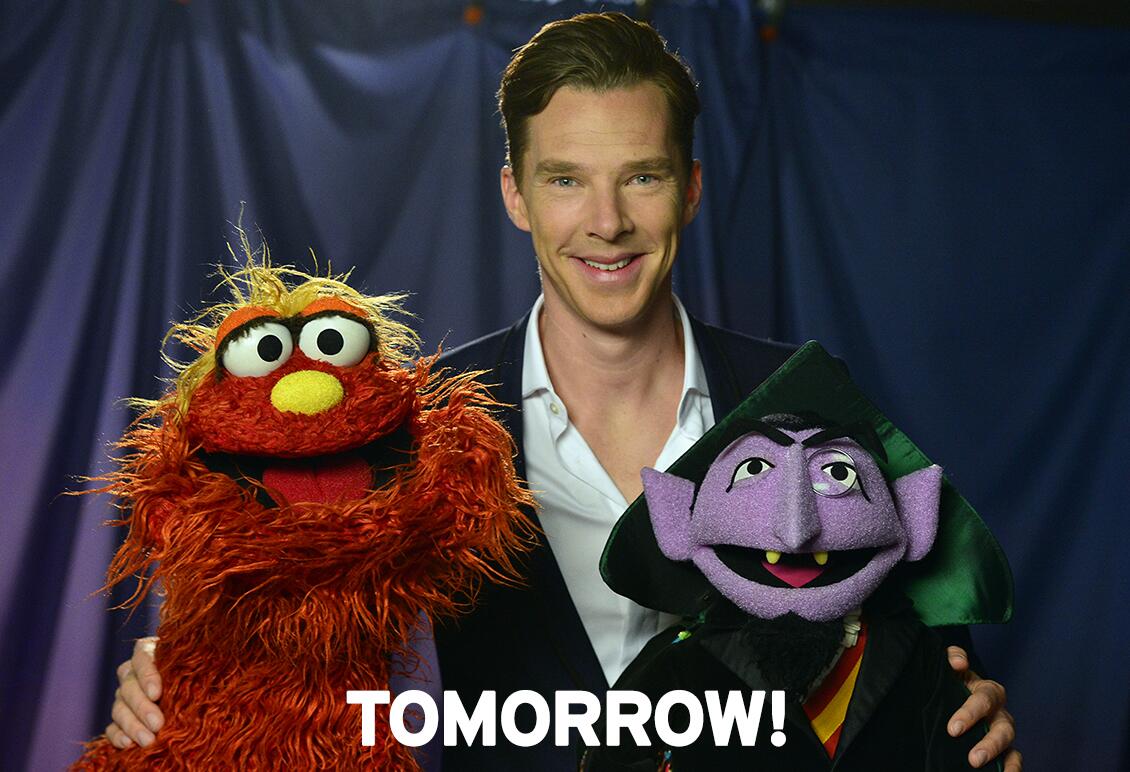 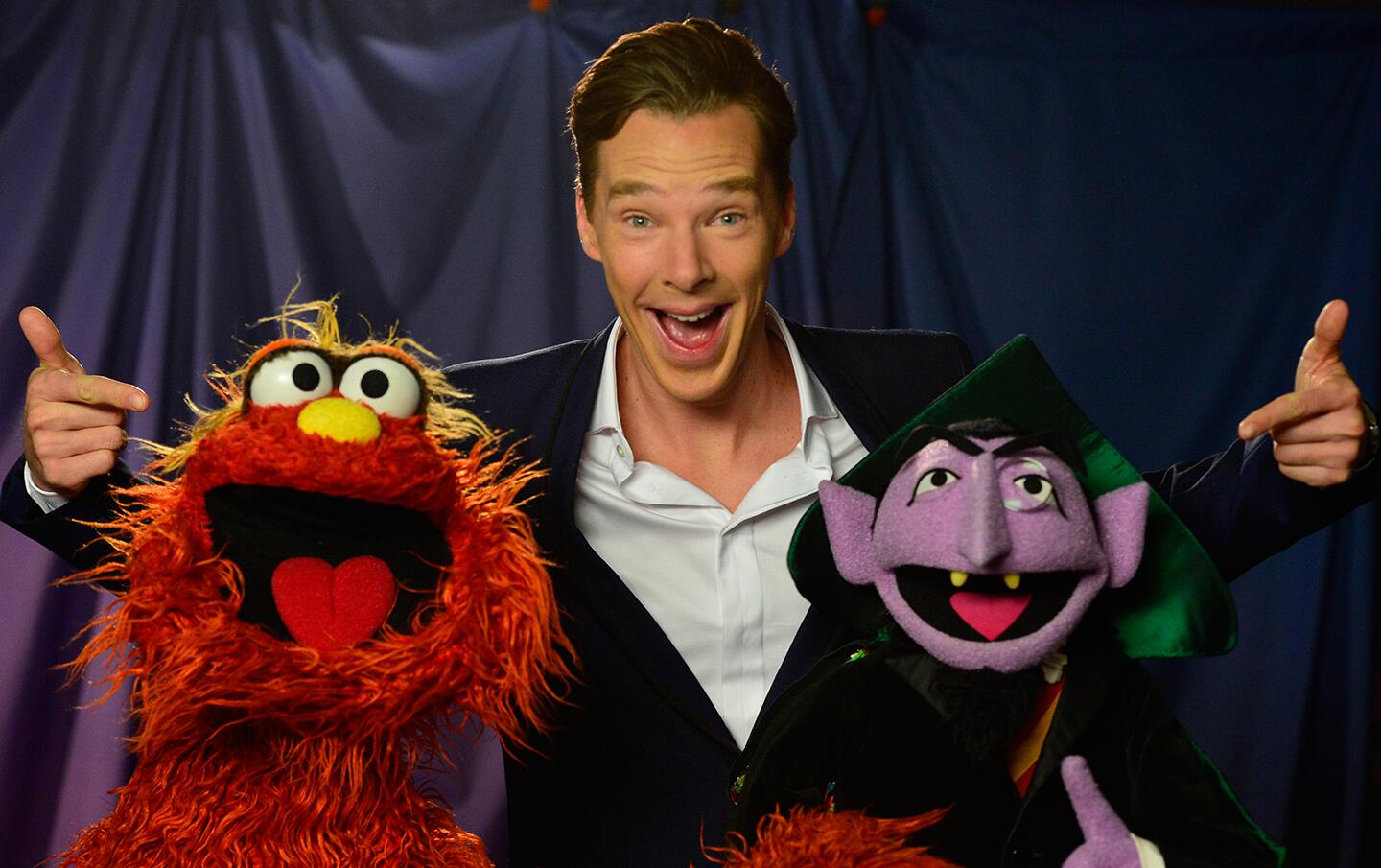 LONDON — Benedict Cumberbatch has been attached to star in the thriller “Blood Mountain,” which Altitude Film Sales will be shopping to international buyers at the European Film Market in Berlin. UTA Independent Film Group is repping North American rights.

The film follows a private military contractor whose special forces team is ambushed and killed during a covert raid, forcing him to personally escort one of the world’s most wanted terrorists over hostile terrain in order to bring him to justice. With a bounty at stake and insurgents and rival mercenaries hunting them, the two find themselves facing not only their enemies, but each other in their fight for survival.

Principal photography is slated to begin in April in Morocco.

Silver Reel will finance the film with executives Claudia Bluemhuber and Ian Hutchinson also serving as exec producers on the project. Skady Lis of Germany’s Getaway Pictures will serve as a co-producer on the film.

Save some champagne: Sherlock will return on New Year’s Day. Which, obviously, means Sherlock himself is alive. Which, in turn, should mean that we’re in for a crazy good explanation of how he survived his tumble off the side of St Bart’s at the end of Series 2. Speaking to ShortList, the man who plays him, Benedict Cumberbatch, was in no mood to reveal spoilers, but said we’re “in for a treat”.

So, what do we know?

Well, after Sherlock’s untimely ‘demise’, his wingman John Watson (Martin Freeman) is channelling his boundless grief into an excellent Magnum PI moustache, and getting on with his relationship with girlfriend Mary (Freeman’s real-life partner Amanda Abbington). This peace and quiet is shattered by the return of his pal. Says Freeman: “If you can imagine you thought someone you loved [was dead], and it transpires they’re not, it’s a huge piece of news.”

Cumberbatch adds that this massive news may not be broken in the most socially adept way: “He is Sherlock, so he doesn’t necessarily go about introducing himself back into John’s life in the best way possible.”

Co-creator Mark Gatiss also had this message for the impatient fans waiting for the explanation behind Sherlock’s ‘resurrection’: “Conan Doyle threw him off a waterfall and left him for 10 years. We left it two and a half minutes before saying he’s back. And there’s that old adage – ‘the suspense is killing me, I hope it lasts’.”

Looks like we’ll just have to bide our time on the big reveal, but maybe if we stare at these exclusive shots long enough, it will reveal some secrets. Like a detective-based Magic Eye.