Timbuk2.
So this one's from a while back. I actually attempted to post about it, and the attempt lasted about a week, being that the file itself was so big and no site would host it. But after a long struggle, I figured it out, and here it is on the blessed internet for your viewing pleasure. It was my final for my first real layout/GD class last quarter, for which I had pretty much the coolest, Jewish, skateboarding, Boards of Canada-listening wonder of a man with stars of David tattoo'd on his wrists by the name of Jon Chester, who taught me everything I'd ever need to know about Adobe InDesign. My class was filled with idiots who talked themselves up only to display consistently shitty design, and would run critiques based on what THEY would do if it had been THEIR design, which in all reality would have only made the work at hand seven times worse.

I worked my ass off on this project; an eight page apparel catalog for any kind of apparel company of our liking. I took the challenge of choosing Timbuk2, a sweet-ass backpack company that already had impecable design for their product and I had no idea at the time how to do anything for them without recreating the same thing. I spent forever on it, a LEAST 40 hours, and at LEAST a handful of Adderall on this project alone, but finally I came up with something I was happy with, four pages after the required amount and on the very last edge of my sanity after realizing that I was in fact a horrible perfectionist when it came to my work.

So here it is. I figured I wanted it to be a unique size, so it was printed and bound with really long and narrow dimensions; about 14" when opened. And because Timbuk2 only sold their bags from their website, I figured I wanted the design to work for something they could just throw in their bags upon an order, which the customer could see when opening their sweet new bag and check out other equally sweet backpack possibilities.

There was a girl that I first met on Livejournal. Her name was

punkthis at the time and her hair was composed of the coolest locks I had ever laid eyes on. She flew to Burlington to meet me and stay with me for a few days, which caused a series of comically awkward events, like tripping mushrooms and hearing her scream while my Dad's face melted before her eyes, drinking a bottle of wine that was of size I had never encountered before and later making out with her only to have the moment not-so-attractively caught on camera, and then not speaking for almost an entire year for reasons unknown to the both of us.

radioedit_, or Elexis as I feel more comfortable calling her now, I attended three parties without actually attending any of them, and found throughout the course of the night a plastic model Millennium Falcon, a stalker, and a skateboard. Regardless of my night actually being pretty fucking excellent being that it wasn't spent sitting at home on Adobe, I'm pretty sure Elexis will continue to convince herself that I hate her because she has awkward social tendencies like that. Well consider it documented proof, here in writing, that I most certainly don't. 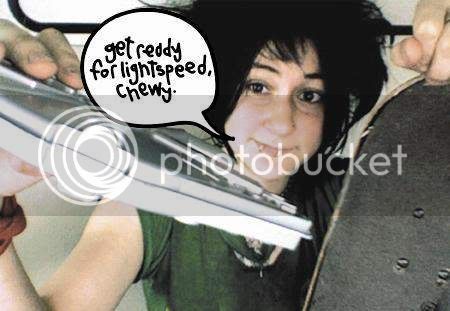 Besides, even if I didn't have fun, the Millennium Falcon was totally a sweet find.
Collapse