This journal is a repository for my Poupee Girl outfits as well as random fandom links. I sometimes make mention of my IRL status. It's friends only, but I'm pretty liberal on who I add to my journal. Basically, if you have anything in common with me, I'll add you. Just comment here and tell me what we have in common. lol

Oh and some warnings: I suck at commenting back at other peoples journals and I tend to take long hiatuses from LJ... Be warned. XD

If you are active in the Poupee community, please feel free to add me! You can never have too many Poupee friends!

Holy shit. I have changed a lot... but in many ways, I've remained the same.

Holy shit... I have changed so much since the start of this LJ.

Here I am 29 years old, living in the Bay Area and have (painstakingly) been doing so for a year and a half. Although Poupee Girl is no longer in existence (it finally closed on 2015年4月21日, an extremely sad day for me, indeed), I have transformed my real life "closet" into a real life version of my Poupee Closet. I have so many of the same exact items/oufits that I had while Poupee was still around. Which is insane for me because I was living vicariously through my Poupee Girl for many, many years. When it was Natsu Matsuri, I would always buy a new yukata and accessories for my Poupee to wear while she stood in front of a vectorized festival background. I would simply stare at it. I would stare at it and pretend so hard that I was in that vector festival, wearing that exact yukata... Now I not only attend Sakura Matsuri and Natsu Matsuri in Japantown, San Francisco wearing cute yukata, I also perform with an Awa Odori troupe at such events! It's tradition for me to perform in the Sakura Matsuri parade! I can't believe that my real life meat avatar is a spitting image of the Poupee Girl I spent so many years living vicariously through.

But I've been going through a fuck ton of shit recently, too. I was assaulted by a roommate and ran out of the house I worked hard to pay for, I lost my job, I began to have terrorizing panic attacks, several people whom I cared about and considered close friends cut me off in extremely rude and painful ways. I've hit a point in my life where I have to take this IRL Poupee Avatar in a different direction; I have to hack this system. Like one of my closest and wisest friends, Mike Everett, once told me, "You can manifest, and manifest all you want... but there is going to come a certain point where the universe is going to test your grit to make sure you are worthy of living in this universe." Well, now is a time when the universe is testing my grit. I never realized until now that I have severe ADHD-- the kind that needs medication. It feels like I am playing this game with a broken controller... Every job that I have had within the last year has told me the same thing, "You talk big but can't deliver" but no one has been able to tell me WHY. People used to say (teachers, bosses, mom) that I was simply lazy. So I took their word on it and worked myself to the bone. I was working 80 hour weeks while only getting paid for 40 to try to compensate for my ADHD on top of a commute of about 5 hours (2.5 hours to get there, 2.5 to get back). It put a serious strain on my body and mind. Then when I got let go for "not being what was advertised" during the interview process, my self-esteem took a nose dive.

I'm going through my LJ now because I was inspired by some friends of mine to read Burning d@n's LJ. Whoaaa. I am SO glad I did. I read it at the exact time that I needed it. I hate to be a "Joe fangirl", and I really do hate to be one, I just can't help the impact his movies have had on me since childhood, but d@n's LJ had the same exact affect on me as an adult that "Angels In The Outfield" had on me as a child. The. Same. Affect. I don't want to go into this too deeply out of "fear of fangirling" but both Angels and d@n's journal taught me that as long as you keep hope alive and do whatever it is in your power to make things happen, things WILL happen... they won't be what you wished for but they will be what you need. And the feeling that you were longing for will be felt despite what the actual outcome of the situation is. I needed this shit. d@n's LJ is a national fucking treasure that should never be taken down, nay, it should be cleaned up and made into a fucking book. That man was so goddamn wise. And genius. And epic. And awesome. And a swashbuckling badass.

Since I mentioned Joe and d@n, I might as well put it out there that the current community I am a part of and active in is hitRECord.org. It is hands down the best, most loving and most supportive community I have ever been a part of. And if you read my LJ, you know I have yeaaaars of experience running, organizing, maintaining and moderating online communities. I can say with good authority that hitRECord.org is made of amazing and talented human beings that I have the absolute honor and pleasure of calling my friends and collaborators. Joe and d@n aside... I would not be here today if it were not for Mike Everett, Teafaerie, epocadofim (Eric <3), Debi and Yoshiko, Kevin Mastros, Johnny Call, Kali Thomas, Mottel Zirkind and so many other amazing and wonderful artists. Seriously, hitRECord has been my saving grace the last couple of years. I hope to make a positive difference in the community one day... That is my ultimate goal.

So here we are... 8 years after my last LJ post. I still don't know where things are taking me but I do know this... I am not the same person I was 10 years ago. I am the leveled up version of my avatar self that my higher consciousness is guiding. My controller is broken and I almost rage quit but my hitRECord.org Clan is keeping me from completely losing the game; they've got hella Medi-Paks and I have acquired some decent armor during my missions. Soon I'll reach the next checkpoint, save the game, fix my controller, come back and ready to be the Tank that I was always meant to be.

I rarely have any of these anymore... Well here's the skinny...

I'm working on hotels for next year's Infinite Bits. I hope to have one by my birthday. (Jan 13) Then I gotta promote the shit out of it! XD I gotta get at least 3,000 people next year. I think it's possible since we had 1500 people in 2009 and it was our first year. It'll just take a lot of work. Hey, to all people in my FL... if you went to IB this year, please bring one more friend with you next year. I SWEAR it'll be WAY better and at a less ghetto venue. ^_____________^=b I have more consoles to put into the museum for next year, too. At least 5 more. We'll also be adding new game rooms and a new section to the museum! :D

I started working at GameStop (again). I have the coolest store on the planet, though. My store manager and assistant manager are the coolest guys and they're pretty laid back. XD The only down side is we get robbed a lot. Although, I haven't experienced any robberies yet. XD

I'm enjoying the time I have now where I'm not CRAZY busy with con work. I'm GLAD I'm no longer working those crazy weeks! Working till 2 or 3AM and waking up at 7AM to do it all over again... 7 days a week... Managing the staff, organizing the events, organizing the volunteers, actually going OUT to promote the show, working on the floor plan, actually drawing up the floor plan on SmartDraw, organizing my partners, managing my vendors, trying to GET vendors, trying to get sponsors (between this and vendors, it takes up the majority of the time for me) and this is just off the top of my head... It's all so taxing. But... Yay for IB 2.0, amirite? LOL I guess this just means that you know the con will be good next year since I'm working so hard on it. XD

I can't get enough of this song.

I haven't posted any scans for... almost a year now. LOL

These were not scanned by me. There are watermarks on the images, but it's nothing too terrible. It can easily be cropped out for avatars and layouts. 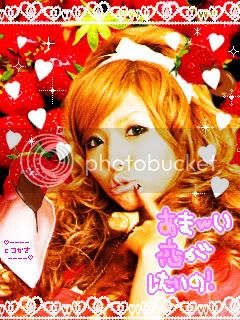 I got an article about me in the Miami Herald. 8D

The convention is this week, you guys... WISH ME LUCK!!!