The Leopard Trek team announced it would leave the Giro d’Italia tonight, following the tragic death of Wouter Weylandt in a crash on stage 3.
"Leopard Trek was allowed to cross the line first in memory of their fallen teammate Wouter Weylandt. The team completed the neutralised fourth stage today, with the team's eight riders crossing the line, arm in arm ahead of the field, along with Weylandt's close friend Tyler Farrar of Garmin-Cervelo."

The stage was "neutralized," meaning everyone rode at a steady, uniform pace as opposed to competitive racing; each team took a turn leading the race, and all riders slowed and fell back to allow the Leopard Trek team to ride ahead and cross the line first, in tribute to their fallen teammate.

I'm pretty sure this doesn't happen in any other sport.

YouTube video of the emotional end of the neutralized stage [pictured above]:

Presenting the Whizzinator, a prosthetic penis to fake urine drug tests. The site also sells dehydrated clean urine. The disclaimer reminds you to only use this product in accordance with local and federal laws, of course.

Now in Missouri, USA, you can get a free handgun with the purchase of a new car. You have a choice between that and a card giving you $250 worth of gas, but the dealership says only two people have opted for that since introducing their deal. A background check is required for the gun.

Why Americans should be celebraing, not bemoaning, the likely imminent cost of $8 a gallon for gas. Meanwhile the rest of the world shrugs and has been paying upto $6 a gallon all this while.

Why casinos have hideously ugly carpets.

All about a homeless millionaire, and why he neither owns nor rents a home or car and lives exclusively in hotels.

A homeless Japanese woman had been living undetected in some man's closet for over a year.

For some bizarre reason, people are starting to think that continuing to live in perpetual hurricane hotspots might not be such a great idea.

Getting high on Jesus, literally. 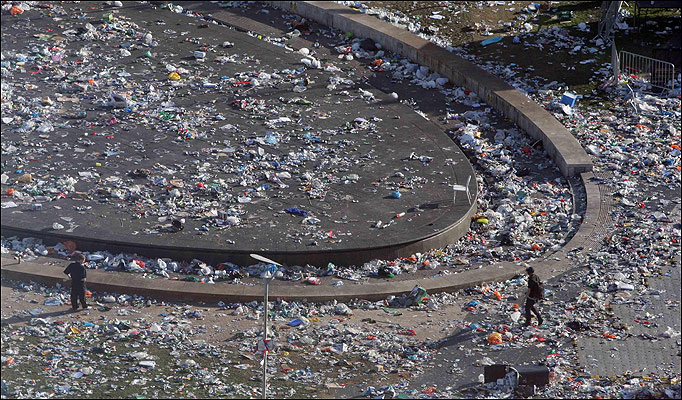 Manchester after the recent UEFA football (er, soccer in American) match between the Glasgow Rangers and Zenit St. Petersburg. Link goes to more pics and explanation of what happened.

The Art of Manliness, a blog dedicated to uncovering the lost art of being a man.

For the first time in history, a double amputee will race against regular athletes in the Olympics, after a panel of experts exhaustively studied him and his prosthetics to conclude he did not have an unfair advantage against athletes with normal human legs.

A 19 year old college freshman has just been elected mayor of a town in Oklahoma.

A collection of injured / disfigured animals that recieved prosthetics.
Collapse