So meanwhile, I've still had no internet. It's been nearly two weeks. The problem is both billing related and technical. I'd explain more but I'd bore you. Basically, life without the internet sucks.

But on the other hand, I have a bike!

This morning I explored the area around the famous and beautiful Lotus Temple, which is close to where I live. I used to live even closer to it. Those of you who have been on my flist for more than two or three years will recall I used to post pics of the sunrise over the Lotus Temple on my way home from work.

Much to my surprise and delight, the parks behind Nehru Place all the way to the park around the Lotus Temple has been renovated and combined into one park. That wasn't the only surprise, because it turns out most of the entry gates into the park are clearly bicycle friendly! (not all of them, though, inexplicably.) So much so that once inside I came across motorcycles and scooters (mopeds) crusing about on the pathways inside. I'm not sure if that's allowed or what but if they can be there then I'm not in any trouble either. 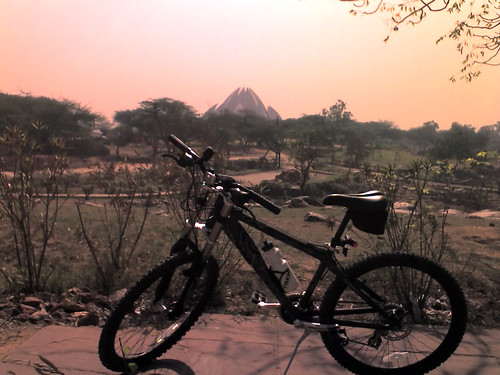 The park is full of uphills and downhills. Nothing extreme but it's not as flat as most of the rest of Delhi is. Plus I'm a city kid so an anthill is a mountain to me.

Tomorrow I get a new crankshaft! My current one is smaller than the one on my old bicycle in Dubai. Or maybe that bike had slightly larger wheels, I don't know. Either way I pedal full pelt on the fastest gear ratio and I can hardly break 30 kmph, whereas I could average 40 kmph on my old bike. Talked to Firefox and they said they can swap out the cranks for the ones on the Target or the Edge, which have a larger diameter crankset. The largest one they have for all terrain or mountain bikes anyway.

Also, I get to try out new disc brake rotors without purchase. My disc brakes are crap. They work, but pathetically, the cantilever brakes on my old bicycle worked way better than these do, which makes no sense. The guys at Firefox are looking into it.

Epic bike ride planned for the 20th of April, aka Adolh Hitler's birthday (no relationship, just popping a random useless fact). How epic? So epic that I'm not sure I'm going. It'll be a gruelling 20 km run (about how much I currently bicycle in about four typical days combined) that's part off-road, part on, and in a stretch of Delhi I've never been to. On the other hand I'll be with other bike nuts. Provided these guys arent on hardcore road bicycles with gigantic gear ratios who can pedal at like 40 - 50 kmph on average without breaking a sweat, I'll be okay. But I have no idea what these guys are like or what kind of bikes they have. Or if I'll even be able to keep up. Still, live and learn and all that, and if all else fails I suppose I can call a taxi.

But the more I think about it, the more I just have to go. I still have yet to meet another cycling nut here. Also by then, I'll have my new cranks in and should have gotten used to them too. Let's see what happens.

From Wikipedia's entry on the 2008 Summer Olympics torch relay, under the section "political fallout' organized by country:

India: Indian national football captain, Baichung Bhutia refused to take part in the Indian leg of the torch relay, citing concerns over Tibet. Bhutia, who is Sikkimese, is the first athlete to refuse to run with the torch.[136] Indian film star Aamir Khan states on his personal blog that the "Olympic Games do not belong to China" and confirms taking part in the torch relay "with a prayer in [his] heart for the people of Tibet, and [...] for all people across the world who are victims of human rights violations".[137] Rahul Gandhi, son of the Congress President Sonia Gandhi and scion of the Nehru-Gandhi family, also refused to carry the torch.

Wary of protests, the Indian authorities have decided to shorten the route of the relay in New Delhi,[138] and have given it the security normally associated with Republic Day celebrations, which are considered terrorist targets. Chinese intelligence's expectations of points on the relay route that would be particularly 'vulnerable' to protesters were presented to the Indian ambassador to Beijing, Nirupama Sen. The Indian media responded angrily to the news that the ambassador, a distinguished lady diplomat, was summoned to the Foreign Ministry at 2 a.m. local time; the news was later denied by anonymous sources in Delhi.[139] The Indian media reported that India's Commerce Minister, Kamal Nath, cancelled an official trip to Beijing in protest, though both Nath and Chinese sources have denied it.[140][141][142][143][144]

India strongly rejected Chinese demands, however, that the torch route be "sanitised" of India's 150,000-strong Tibetan exile community, by which they required a ban on congregation near the curtailed 3 km route. In response Indian officials said India was a democracy, and "a wholesale ban on protests was out of the question".[145] Contradicting some other reports, Indian officials also refused permission to the "Olympic Holy Flame Protection Unit". The combined effect is a "rapid deterioration" of relations between India and China.[145] Meanwhile, the Tibetan government in exile, which is based in India, has stated that it did not support the disruption of the Olympic torch relay.[146]