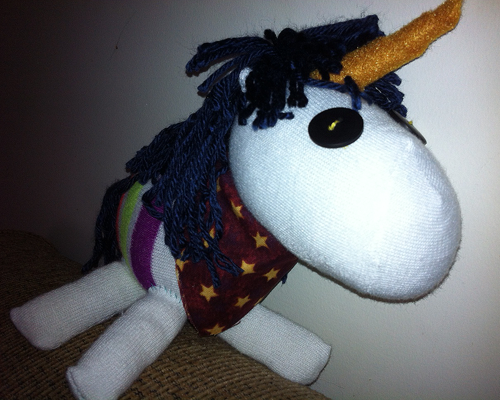 so i was making a unicorn, and decided to use a sock. i realized it's really easy, so i thought i'd just throw the pattern out there for anyone who is interested. 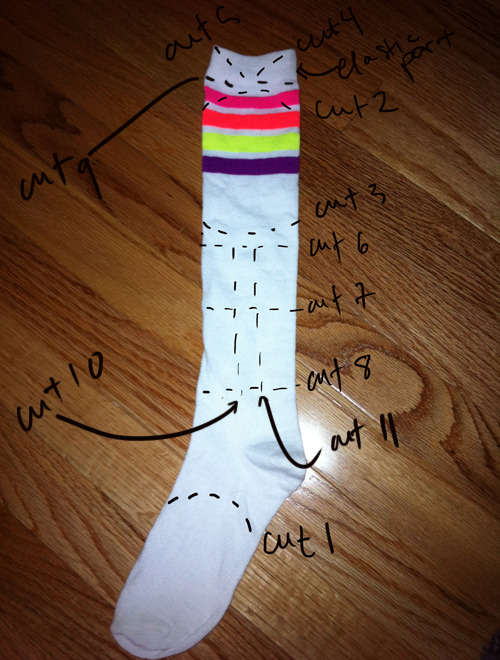 so i used a knee sock and when you use a knee sock you just need one per unicorn. use white, pattern, whatever you like.

for the body make cuts two and three.

you want the head and body to be roughly the same size to give it that kind of plushie look to it. make the body just a little bigger so you can make it fatter and have room for the legs and such.

(make sure you turn the sock inside out!!!)

sew the head so there is only a small hole to stuff it with. turn it back to the right side, stuff it, sew up the hole. now do the same for the body BUT DO NOT SEW UP THE REMAINING HOLE. instead use the edges of the hole to connect the head and the body. make sure the head is sewn on tight and doesn't just flop around.

now make cuts 6, 7, 8, 10, 11 to cut out four legs. (one longs side of each potential leg will still be connected, and you'll have to sew up the other three. sew two sides (one long, one small) and then turn it to the right side and stuff it. connect the legs as you connected the body and head by using the open end of the leg to sew it onto the body.

for the ears make cuts 4, 5 and 9 for two ears. use the elastic part so you don't have to stuff them. my ears are king of small, which is was a mistake, so you might actually want to make them larger... but a triangle cut, sew it, and then stuff it depending if you made them larger, and again use the open side to sew to the side of the head.

sew on buttons for eyes. 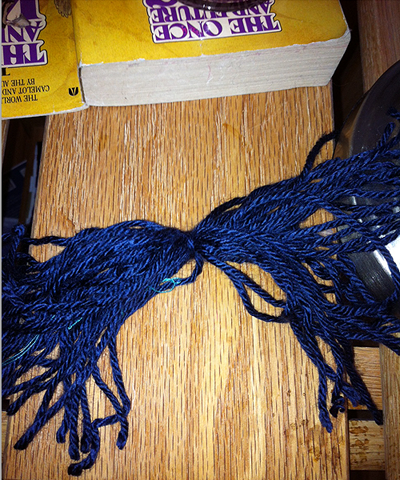 and for the hair. for the tail i measured about around 12 ft of yarn, and then folded it in half until the whole thing was about 8 inches long. i then tied an extra piece of yarn and tied it around the middle of the bundle of yarn. cut the loop ends and then sewed the middle part to the butt of the unicorn.

do the same thing for the mane/head hair only you'll do it twice. for the top of the head, tie the extra piece of yarn higher to the top so that you can give the unicorn some bangs. sew this bit on at the top/back of the head. for the second of the mane, make it the exact same way at the tail and sew it to where the head and body meet.

i added a neckerchief because i can.

for the horn, i curled up some felt, but you can also cut out a long triangle shape and stuff it and sew it similarly to the ears/legs. for the felt, i just curled it up, didn't have to stuff it and then sewed it on to the top of the head where the hair and head met so that the base would be mostly covered.

and voila. a sock unicorn.

it only took me a couple of hours. will probably make another and see if i can make it a little neater, but it's all simple and you don't even need a sewing machine.