School starts on Monday. In a way I really don't want it to, but at the same time I realize that staying at home too many days in a row sends me into a downward spiral of laziness and hermit-ness. So it's for the best, really. Because I'm food-oriented, I'm very focused on what I'm going to take for lunches. I made little pizza bites yesterday. They're basically wonton wrappers stuffed with sundried tomato pesto, light ricotta, shredded cheddar cheese and veggie pepperoni. I made them over the summer and they made awesome grab and go snacks for the freezer. I also made soup and cookies. Going back to school seems more tolerable when I know that I'm going to have good food to eat.

Richard and I had a little pregnancy scare earlier this week. I started a new birth control and I was worried that it hadn't worked. I took a pregnancy test and everything! But it was negative. We took our nieces for the afternoon today, and even though we had a lot of fun together (I sewed circle skirts for both of them and Richard made bread with them) I'm so glad that my life isn't like that every day. At 28 I'm starting to wonder if I'm ever going to want to have kids. 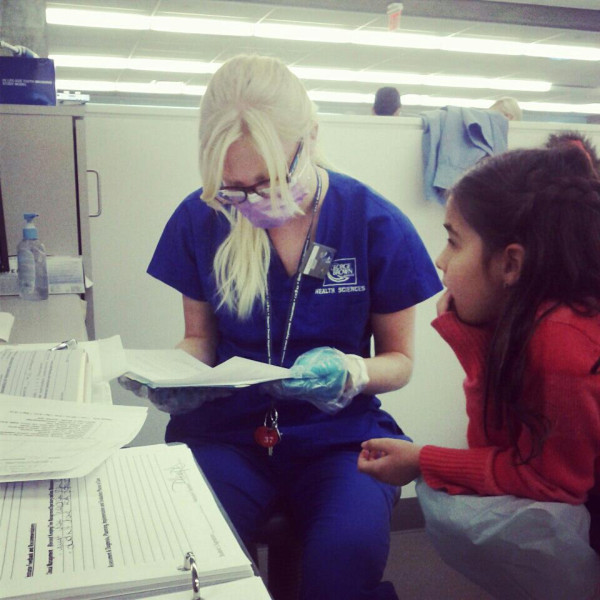 From a few weeks ago when my niece came in to be my patient. :)

A rep from Sensodyne came into our class today to talk to us. I am such a nerd. I was so interested in what he was saying, especially about the ingredients that are in certain toothpastes that can make the lining of your cheeks peel off (I've had it happen before and it's really bizarre... I love that I'll be able to tell my clients why it happens). All of their new toothpastes are free of SLS (Sodium Lauryl Sulfate), which is amazing.

I had my last test this afternoon. It was on hard tissue charting, so it was just a bunch of charts that I had to fill in with symbols for certain things. I think that I did well. I'm so glad to be finished!!

After class I went shopping and found a really nice black wool blazer that was originally over $100 on sale for $11! Seriously! I was so blinded by the value that I didn't notice that it fit a bit big, but I love it enough to take it in to have it tailored as long as it doesn't cost TOO much. I'll take it in after I get paid for the last theatre gig that I did.

Who has two thumbs, speaks limited French and has a job at a kick-ass tea store!

I've had a very productive morning! I finally printed some photos that I've been meaning to print and frame... Mostly of Richard's parents and the nieces/nephew because we don't have a lot of those up right now. I also printed 2 old photos. I can't help myself. I love looking at old black and white family photos.

I'm making a business card and I'm having such a hard time with it. Everything I do on the back looks stupid. I want something super minimal, but it ends up just looking lazy. What do you guys think? Blegh. I'm bad at this stuff.

Anti-bullying month
Who is the biggest bully in your life? One response chosen at random will win an Amazon Kindle. [contest details] (sponsored by
Reply 631

I'm fortunate enough to have so few bullies in my life that I really need to think hard about this question. It used to be my boss, but now that I'm a student again I think that it's myself. 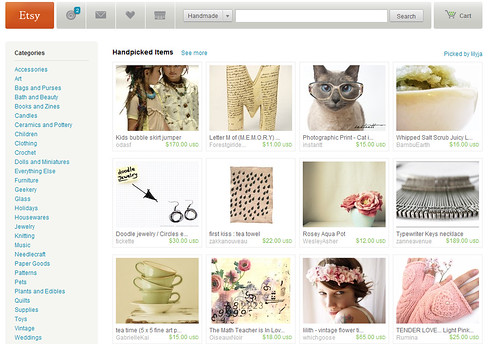 On the front page of Etsy again!, originally uploaded by sharp.photo.

Here's a screencap of my cat in glasses print on the Etsy front page. I made it to 15 sales today, and I've had 2 front page features since April! Not bad for a 7 month old shop that I really neglect sometimes.

theropod
Good morning, star shine
On spaceflights, astronauts are awakened by songs of their choosing. What song would you pick?
Reply 654

How many people said Space Oddity by David Bowie? I was thinking that I'd choose that but then I remembered that the lyrics go, "Your circuit's dead, there's something wrong!" I don't think that I'd want to hear that. Maybe Sexy Boy by Air? For some reason that feels very "waking up in space" to me.

Okay, LJ. I put up with all of the stupid-ass ads everywhere on your site. But now you're starting to piss me off.

It started with that pop-up ad for Alexander Keiths. It always popped up just as I was clicking on the "log in" button and I would accidentally click on it and end up at the Alexander Keiths Facebook Fan Page. Not cool!

Now, you keep giving me a black screen with an ad in the middle. "After this advertisement, you will be returned to your Livejournal experience." I can't click around it. I have to wait for it to load. Grr.

And now Vaseline has been the sponsor of the last 2 writers blocks. I feel like I'm a secretary in a test group in Mad Men, being asked to talk to Doctor Faye about my skin care routine. No thank you.

We are in Lyon in France! This morning we climbed to the top of the hill for a view of the city and to see an old church. This afternoon we window-shopped and drank wine on a terrace in the old city. Earlier this week we were in Provence in the south of France. We stayed in Saint-Remy-de-Provence, which was really charming. We were there for 2 days and on the first day I must have had food poisoning or something because I spent the whole day in the room throwing up! I left the room a few times to wander around with Richard and really enjoyed the town, but.. Yeah. Wish that I had felt better. Still, Provence is very beautiful and we had a good time. I just couldn't tell you much about the food! Haha.

Tomorrow we head to the Pyrenees where we will relax and do some hiking, then we're in San Sebastian in Spain for relaxing on the beach, and then we take the train to Paris and fly home from there! Time is passing so slowly here.. I love it. It feels like months since we were in Barcelona, but it's really only been a week. We've only been married for 9 days!

I can't check my f-list from this app, so I hope that you are all doing well and staying happy! <3